Another country, another war

They are places that are overflowing with history, of peoples lives and of attitudes not simply to death, but also to life, to those things that were held to be of highest value in the lives of the dead or which defined their status in life - for it is these achievements that are recorded on the memorials. Most often it is their professions that are remembered, architect or farmer, sometimes their qualities. But occasionally it is something quite different.
Thus in Ulverston cem there are two gravestones standing side by side that record the lives of various members of the Birrell family. 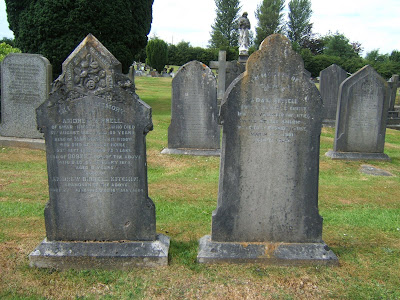 That on the left remembers Andrew Birrell of Swarthmoor Hall who died on the 31 August 1883, aged 59 years. Below his name are those of Margaret, his widow, who died at Rosside House in 1902 aged 72; Robert, their son who died aged 18 in 1873 and finally Andrew Birrell Kitchin, their grandson who died in 1884, aged 1.

I have an interest in Swarthmoor Hall, a beautiful old house nr Ulverston, the spiritual home of The Quakers. As a consequence of my interest I looked into the family and it was quite fascinating. Andrew Birrell came down from Carlisle, via Brigham & Lamplugh where his children were born, and farmed at Swarthmoor from the 1860s. After he died his widow, Margaret, continued at The Hall into the 1890s which is when this photo would have been taken. 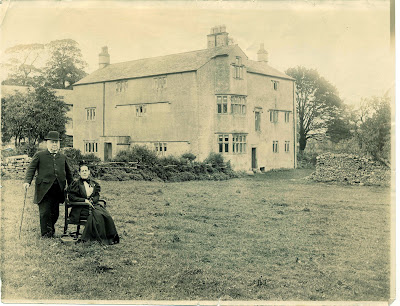 The seated lady is Mary Snowden, an American Quaker. And that is a bit of a coincidence. In the 1830s Andrew Birrell himself was in the USA, his return by boat is recorded online.

And then to return to the two gravestones - the one on the right is;

He must be a veteran of the American Civil War.

This old photo shows members of Adam Birrells unit during the conflict, in this case Company A, but Adam probably knew them.

I cannot trace the birth of Adam Birrell but he must have been a brother or cousin of Andrew, certainly a close relation. They were probably in America together in the 1830s. Andrew returned home to farm at Swarthmoor, Adam stayed on to fight for the Union only to return to England to die. Clearly he or his extended family felt that whatever else he might have done in life, his service in the Union Army was the achievement for which at considerable expense he should be remembered.

Remarkable
Posted by Louis at 21:56

Email ThisBlogThis!Share to TwitterShare to FacebookShare to Pinterest
Labels: Ulverston