On the road from Bowness to Kendal there is a small roadside church serving the dispersed rural community of Crook. The church itself was built in 1882 to a design by Stephen Shaw replacing an earlier Manor Chapel, the tower of which still stands in the fields some way away.

The principal war memorial is an unascribed brass in the nave of the church. It bears four names from the Great War; two Borderers and two Colonials, a New Zealander and a Canadian. 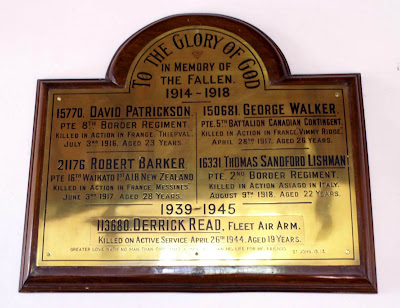 The memorial states that 21176 Pte Robert Barker served with the 16th (Waikato) Regiment of the New Zealand Infantry although the CWGC registers describe him as serving with the 1st Auckland Regiment. He was 28 when killed at Messines in June 1917 leaving a widow, Louisa, living at Maehau, Cape Colville, Cabbage Bay, Auckland. What does AIB signify ?

Just over a month earlier 26 year old 150681 Pte George Walker had been killed in the great Canadian attack at Vimy Ridge, or Vimmy as the memorial describes it, while serving with the 5th Bn (Saskatchewan Regiment) of the Canadian Expeditionary Force. He was farming near Brandon, Manitoba when he joined up in November 1915. His father, Richard, remained in Crook.

The two lads who stayed at home were killed at Thiepval on the third day of the Somme offensive and on the Italian front in 1918.

Many of the guy's contemporaries are named on the pre-printed roll which hangs in the church. It is an early one, probably 1915; there are no Japanese or American flags. 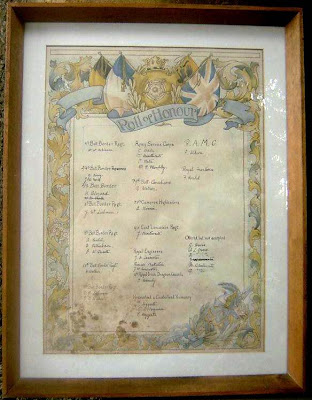 After the 39/45 war another name had to be added to the principal brass memorial, that of Derrick Read, son of Richard and Annie Read of Crook.

Though there was just enough room for '1939 - 45' on the original memorial Read's name had to be inscribed on a piece of brass that was then inserted into the existing memorial. I imagine that there was originally an inscription which had to be cut out.

Unusually Read is also remembered on a stone memorial at the south west corner of the church, effectively the village's WW2 memorial commemorating their only loss. The flowers show that he is still very much remembered. 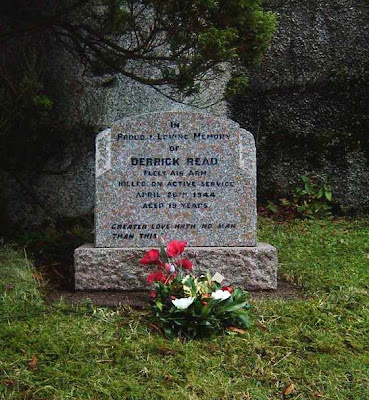 Temporary Leading Airman Derrick Read was killed in an air crash while flying with the 771 Squadron, Fleet Air Arm from HMS Tern, a lonely airbase at the unfortunately named village of Twatt on the Orkneys. His pilot, Louis Weatherall, Temp Sub Lt (Air) Royal New Zealand Volunteer Reserve, was also killed and is buried at St Olaf's, Kirkwall. He was the 22 year old son of Francis William and Louisa Culf Weatherall, of Ettrick, Otago, New Zealand. Derrick Read's body was never recovered. His name appears with those of some 2000 others of the Fleet Air Arm with no known grave on the memorial at Lee on Solent. 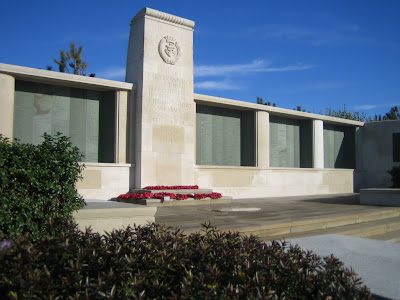 Many of the guy's contemporaries

Many of the lads' contemporaries

Yes...I would also prefer 'lads'' but apart from that I found all this informatio really interesting ad I love the fact that you have devoted so much time to learning and telling us about people who made our life what it is today ad to whom I am so grateful.It's heartbreaking to imagine the deadful conditions and the tragic loss of life ...wonderful young men who never knew a future..I just wish today's generation appreciated the sacrifices that were made in order for us to be
free.