Looking at memorials for their own sake is a bit of a lonely occupation, no one else seems much interested. However, the names on memorials are another matter. There is a pre-occupation out there with the dead which, I must confess, I find rather sad. The reason for my sadness can be found in the lists of casualties, in Afghanistan & Iraq.


Since the start of the Bush/Blair adventure in Iraq there have been over 200 service personnel seriously or very seriously injured. In Afghanistan, 230. That is in addition to the dead. There is no figure for the traumatised and bewildered. I could probably trace a dozen or so of these badly wounded on the web, maybe a picture or a short biography, but most are anonymous. I remind the reader that the vast majority are young men, some very young, barely out of school. They fight at the behest of a soulless Whitehall, some die, but the rest grow old, their services and the price they may pay in tormented dreams entirely forgotten by Politicians and society until an anniversary reminds us of their exploits and the debt owed by the nation. It was always thus.

One of the consequences of the pre-occupation with the dead is a vast number of websites, booklets and pamphlets that list the named dead on memorials, sometimes describing their brief lives, but always details of their service and where they are buried or commemorated.

A recent example, published in November 2008, has been produced by the Cumbrian Railways Association. 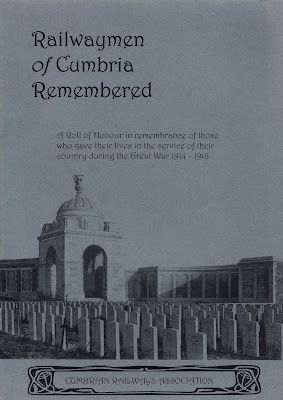 This rather well produced publication lists the memorials erected by the various Railway Companies that operated in Cumberland, Westmorland and North Lancashire around the time of the Great War; companies such as The Furness Railway, Maryport & Carlisle, Cockermouth, Keswick & Penrith as well as the larger organisations such as the North British, Caledonian and L&NWR. The name of every dead man is listed.

But where are the wounded and those who served?

Do you think that we could do more to celebrate the living?

But with them still alive would we not prefer to show our recognition directly?

We could celebrate their energy, now, as we did (sadly past tense) with the B of the Bang.

Could we not encourage Chris Brammall of Ulverston to demonstrate his creativity here ? Perhaps something really modern based on LEDs of Oxley fame.

Is it inherent in a memorial that it is there for ever - or can it be a short term memorial ?