The boundary between Cumbria & Lancashire weaves along the ridge between Silverdale (Lancashire) & Arnside (Cumbria). So quite a few men who are commemorated on memorials in Silverdale would now be considered Cumbrians. Thus I include on the blog a roll of honour from the village of Silverdale.

It has quite an interesting history. Apparently it was used for many years as a backing board for a picture in the Methodist church and only saw the light of day a couple of years ago when the picture in question was checked out.

It is interesting. Pre printed and dedicated to 'King, Country & Humanity', most unusual. Along the top are representations of three medals; The Victoria Cross in the centre, the Distinguished Service Order on the left (Officers), & the Distinguished Conduct Medal on the right (other ranks). 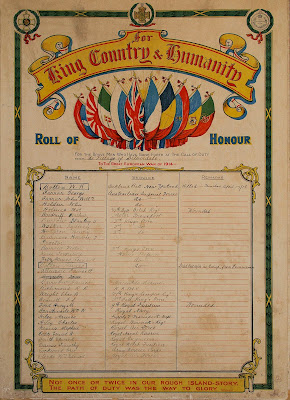 The flags include that of Italy which only entered the war on the allies side in April 1915. The hand writing appears to be all one hand including details of a 1918 death; altogether I suspect it is post war.

There are three Australians and five 3rd Bn Kings Own Royal Lancaster Rgt. One guy is named only as Proctor - no forename. There are no women named.

It seems that the roll has disappeared into the black hole of a private individuals collection of Silverdaleiana - bad news - of all things memorials such as these should be in the public domain for all to see, that the men may be honoured.

Got an email from Howard of Cartmel:

Minor detail regarding Silverdale.
In 1909 Haldane reforms 3rd Bn - which was Militia, became Special Reserve - HQ Bowerham. The 2 volunteer Bns became 4th and 5th. 4th was North Lonsdale Territorial Bn. and 5th South Lonsdale. The distinction between these two became more and more blurred during WW1 - Lord Cav was Colonel of the 5th. until wounded at 2nd Ypres, either way the 3rd was mobilised at the outbreak of war and became a feeder unit for the fighting battalions abroad. The men would join up as members of the 3rd Bn. train and then go abroad to wherever.