Spent today in Grange as I do every Tuesday & took a look around the charity shops - as one does. The top hospice shop always has quite a number of books so I bought a recent biography of Nelson for a few quid. I also bought a volume of little value that my father used to have - The Story of 25 Eventful Years in pictures -

It is a pictorial record of the first 25 years of the reign of George V and Queen Mary, from 1910 to 1935, & describes the vast changes wrought in Britain and the world in these years. Quite a few pages are dedicated to the armistice of 1918 & the peace celebrations of 1919. One of the pictures, a double page spread, shows a section of the Peace March of July 19, 1919. On this day thousands of troops marched past Lutyens' temporary Cenotaph in Whitehall led by many of the wartime leaders.

The Royal Navy were represented by David Beatty who as a Rear Admiral had famously led the First Battle Cruiser Squadron at Jutland and, after two of his ships blew up, uttered the immortal words,

'there seems to be something wrong with our bloody ships today' 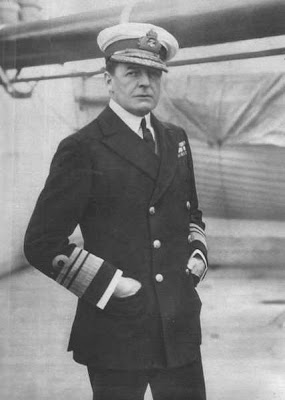 In September 1919 Beatty was promoted to Admiral of the Fleet and elevated to the Peerage as 1st Earl Beatty, Viscount Borodale and Baron Beatty of the North Sea and Brooksby. Not bad!
Beatty can be seen on the pic below, he's the one in the centre leading the main body of matelots some paces behind the lad carrying the flag. 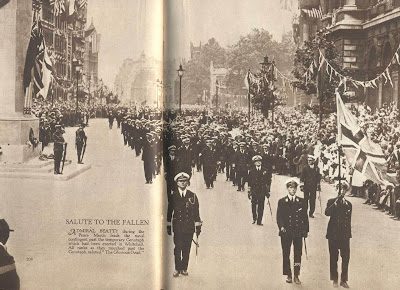 The lad with the flag was midshipman J B Somerset, reputedly related the the Cavendish family of Holker. The union flag he carries is now in the Parish church at Cark, near Cartmel. 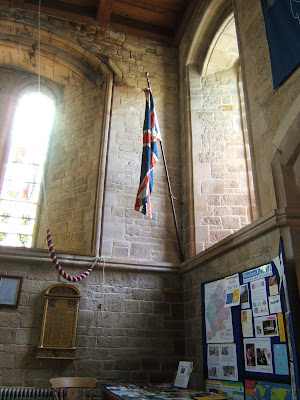 Rather sadly relegated to a corner, above the bookstall, at the back of the nave.

A chap who was locking up the church as I arrived tells me that a few years ago one of the churchwardens decided the flag was a bit mucky after some eighty years of hanging there, so he took it home and put it in his washing machine! No damage seems to have done.
Posted by Louis at 21:57