A death in Afghanistan

I spent the afternoon with a friend at Aldingham, one of my favourite places. The churchyard stands at the very edge of the great expanse of Morecambe Bay. Today was beautiful, warm and sunny, the hills of Yorkshire blue on the horizon. 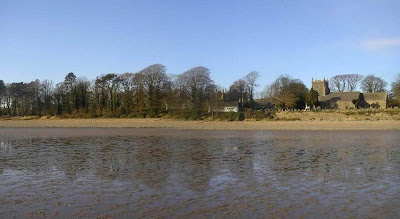 The present church, dedicated to St Cuthbert, is twelfth century but most probably supersedes an earlier Saxon foundation. It is almost certainly one of the resting places of the body of the great Northumbrian Saint as it was carried round the north in the ninth century to avoid the ravages of the Danish Vikings.

It was a wealthy crown living acquired by the forfeiture of the Lancashire estates of Lady Jane Grey following her attainder in 1553/4. It had a number of illustrious Rectors. In 1848 the Rev Stonard played host to a young Queen Victoria in his vast vicarage.

In 1849 Canon John Macaulay M.A., brother of Lord Macaulay the eminent historian, was given the living. Educated at Peterhouse, Cambridge he was Hon. Canon of Carlisle. He died here on 16 April 1874 and is buried in the churchyard. 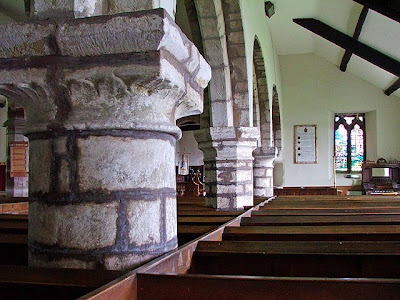 At the east end of the south aisle, with its wonderful 12th century pillars, there is an imposing marble memorial set on the wall. It carries the names of the four grandsons of the Rev Macaulay, all killed in battle for God, King & Empire. 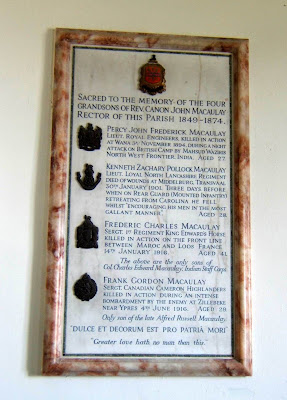 Lt Kenneth Zachary Pollock Macauley of the Loyal North Lancs died of wounds received 'while encouraging his men in the most gallant manner' at Middleburg in the Transvaal during the Boer War.

Both these guys were the sons of Colonel C E Macaulay, late Probyn's Horse and the Indian Staff Corps who is himself buried in the churchyard with the Rev Macaulay, his father.

Frank Gordon Macaulay, a third grandson of the Rev Macaulay and only son of Alfred Russell Macaulay, was killed 'during an intense enemy bombardment' at Zillebeke, Flanders on June 4 1916.

However, there is a fourth name. That of Percy John Frederick Macaulay, eldest son of Colonel Macaulay.

On the day I write this a young British Soldier has been killed, probably by Mahsud Waziris, close to the old North West Frontier.

I don't know what to say.

Bloody politicians I guess and their gross ineptitude and arrogance - the grief is the same as always it shall be. Blair certainly has his legacy, an angel of death..........

Just come online to record that the lad who died on the same day as Harry Patch was Bombardier Craig Hopson, 24, from Castleford, West Yorkshire, and was appalled to discover that two more boys are dead in Blair's Afghan adventure.

Email ThisBlogThis!Share to TwitterShare to FacebookShare to Pinterest
Labels: Aldingham