What's in a name?

Taking a bit of a leap of faith with this posting, or a leap of imagination.

Surnames are odd things! I guess they identify us, give us our individuality, but they also link us with the past. Until recently they could be a label of locale, of belonging, not simply to family, but to place; people didn't stray far until the nineteenth century. My Grandmother was a Waterworth. In the early years of the nineteenth century Waterworth's would only be found on the Lancashire/Yorkshire border and in one or two communities down south. Incidentally, every Waterworth on the planet is reputedly descended from one guy, a mediaeval Water Bailiff from Rufford in West Lancashire.

So what is in a name?

On the Great War memorials of Furness there are a number of names that are distinctly local; Woodburn, Pennington, Kitchin, Postlethwaite. They are names that occur in North Lancashire for generations. There are others who are not represented among the dead, Mackereth is one such.

Thus it was quite remarkable to be surfing the National Archives site and, coming across the full listing of Trafalgar veterans to find the name of William Mackeras.

William was born in Ulverston in 1780 and in 1805 was serving as an Ordinary Seaman aboard HMS Naiad, a frigate in Nelson's fleet, present at Trafalgar. Some years later a local paper carried a report on an event probably about Ulverston William...

Mr. William MACKERETH, one of the remaining few of the heroes of Trafalgar, who has been residing for some time in Troutbeck, was on Tuesday last entertained by his friends on leaving the vale. The "Old Commodore" and "Mackereth's Gone to the Wars" composed for the occasion, and several appropriate songs, were sung on his health being drunk. The old sailor responded in a characteristic speech, and only regretted he was not engaged with the Baltic fleet where "England expects every man to do his duty."


Looking further I discovered that there were a stack of Cumbrians at the battle. Able Seaman Joseph Ben of Keswick served on HMS Bellerophon. Sam Wise of Skinburness served on the Polyphemus as a Master's Mate. Over 100 Cumberland men were there, mostly from the coastal ports of Workington, Whitehaven & Maryport, although there are a significant number from Carlisle. 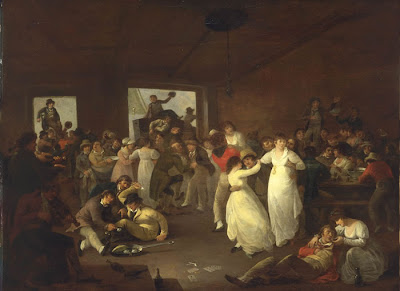 There were Westmorland men too. James Clarke of Ambleside fought in HMS Ajax. Mathew Hartley was a press ganged 51 year old married man from Kendal. His first ship was HMS Victory in which he served at Trafalgar. He survived the French wars and was discharged, presumably to make his way back to Kendal, in September 1814. At least 11 Westmorland men fought.

John Woodburn was a Private of Marines in the Leviathon; was he a south Cumbrian?

Check here for the story of the British Tar in paintings.

Finding all these names took me to the University of Southampton website and the database of men who fought in the 100 Years War, veterans of Agincourt, Orleans; Harry the Fifth's Band of Brothers.....

One of the principal families of mediaeval Cumbria was the Harringtons; there is the Harrington chantry at Cartmel Priory. Searching this name on the database, under 'Captain', threw up loads of names of common soldiers. One is William de Dunourdale, or in modern parlance William of Dunnerdale, who was an archer in King Harry's Expeditionary Force of 1415. He is listed in Sir John Harrington's muster roll and probably fought at Agincourt. 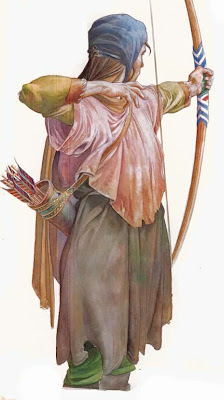 Thomas Makereth was an archer in the same Company. Was he a forefather of William Mackeras who served at Trafalgar?

It is easy to connect to the English Longbowman. Find an old unrestored church and look around the porch and there you may find grooves in the stonework such as these at St Anthony's, Cartmel Fell. 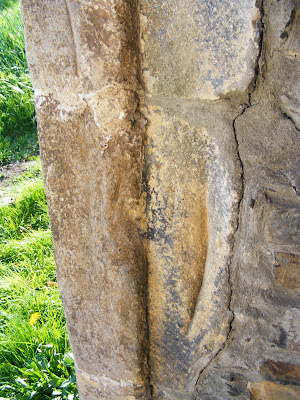 They were created by bowmen sharpening their arrowheads as they waited their turn to practice in the churchyard butts, anytime between c1350 - c1650.

Prints of the sailors pic can be purchased at The National Maritime Museum
Posted by Louis at 21:13