William Morris at Bassenthwaite & a connection with the Battle of Britain

Don't know where I would be without Rod and his amazing camera; this blog would certainly lack some great images. He seems able to get superb pics in every condition of light, without a tripod. It's an impressive camera though! And this week it came into its own again.

Probably the most common form of memorial to be encountered in the county is the plaque. Sometimes carved wood or more commonly brass or bronze they are everywhere, in chapel, church, school and factory. Many are made by Wippel or Osborne, both companies being major suppliers of church furniture and ornaments since Victorian times. However, communities and individuals occasionally employed slightly more exotic makers, the Keswick School of Industrial Arts or, in the case of one at Bassenthwaite, William Morris. 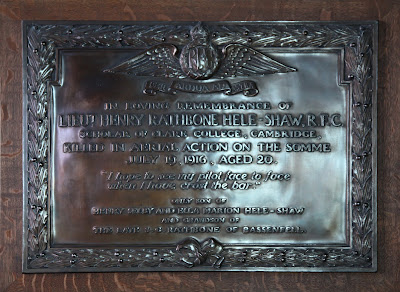 Henry Hele-Shaw was the only son of Dr Henry & Mrs Ella Hele-Shaw of Westminster, neighbours of Morris & Co. Educated at Marlborough he had just obtained a scholarship to Clare College, Cambridge when war broke out. He joined the Public Schools Brigade and quickly obtained a commission in the RGA and obtained a Royal Aero Club flying certificate number 1728 on September 7, 1915 flying a Maurice Farman Biplane. (His date of death here must be when missing officially became killed) 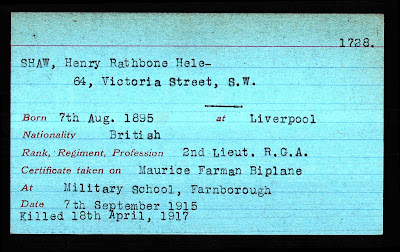 He joined the Royal Flying Corps in late '15 acting as a ferry pilot before joining 70 squadron where he was very soon wounded. Shortly after rejoining his squadron he got into a scrap while piloting Sopwith 1½ Strutter A386, with 2nd Lt Robert Claude Oakes (formerly Royal Field Artillery) as observer. On the same day Ltn Kurt Wintgens of KEK Vaux claimed a victory over Strutter '9653' near Arras, probably Hele-Shaw. It was Wintgens' 9th of his eventual 19 victories. He was shot down on 25 September 1916.

It seems that young Henry was identified and buried by the Germans in the village of Le Verguier near St. Quentin where his grave was discovered by advancing British troops in April 1917. Post war he was reinterred at Jeancourt Communal Cemetery, near Peronne.

Here is his medal card. 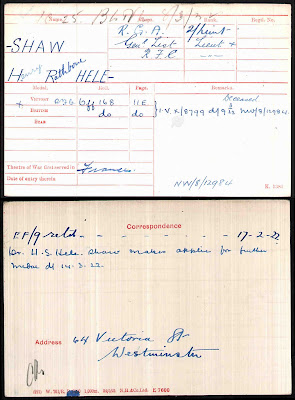 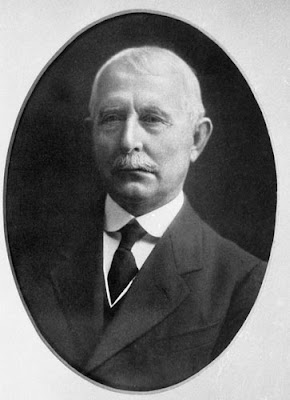 Born in Billericay in 1854, the eldest of thirteen children, he was apprenticed to Rouch & Leaker, Engineers, Bristol, before obtaining a degree at Bristol University. At age 27 he became the University's first Professor of Engineering. In 1885 he took the new chair of Engineering in Liverpool where he met and married Ella Marion Rathbone of the important Liverpool Quaker family. In 1904 he established a college of Engineering in the Transvaal and became Principal. A member of The Royal Society he died at the Cottage Hospital, Ross on Wye in 1941 leaving his wife, who died in 1947, and a daughter.

Henry was also important to the development of the Motor Car, the discovery of Hele-Shaw Flows (??) and the invention the variable pitch propeller, central to the success of British Fighters during the Battle of Britain.

Although Lt Hele Shaw's parents lived in London the memorial is probably here because his mother's family lived at Bassenfell Manor, a significant country house close by. Her sister, Hilda Maria Rathbone, has an extraordinary Arts & Crafts memorial in the church.

It is unsigned but has to be a major designer. Is this also Morris?

Rod sent me the following info; (he seems quite impressed!)

...the Hele-Shaw model is an analogue model modeling fresh water, salt water, oil or gas thro porous media (rocks). It consists of two parallel plates of glass. Separation represents permeability, immiscible fluids of differing viscosity represent the waters etc. It models a vertical slice thro an aquifer. I once, in a former life, built one of these models with a guy from Imperial College. It represented the intrusion of saline estuary water entering the Wirral red sandstone aquifer.

Thank you for these photos. I was just at Henry Selby Hele Shaw's grave at Ganarew. His tombstone was almost unreadable and he was not among his immediate family. It hardly reflected his importance as an inventor of things we still use daily.

Thank you so much for the comment. How sad that the old man's grave is untended and unrecognised after having made such contributions to the national good.