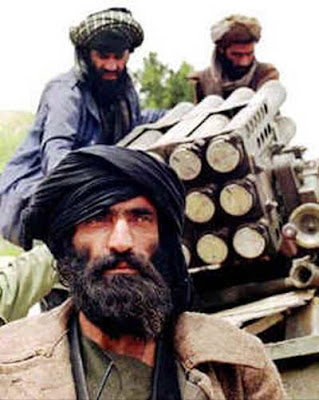 The Taleban are, I think, a fearsome foe for western armies. They are totally motivated and quite ruthless; they will not tolerate foreign forces on their soil. But it has been so for generations. Their fathers and grandfathers fought the British to a standstill for more than a hundred years, then the Russians and now the Americans who, courtesy of Butcher Blair, dragged us back into the present, Fifth Afghan War. Thus far they have always won ... and following the revelations on Wikileaks it seems they may well continue to do so. Throughout this whole miserable business the tribesmen of this extraordinary country have inflicted grievous casualties.

Perhaps the Afghan's greatest success was in utterly defeating the British forces under General Elphinstone in the First Afghan War of 1839 - 42. The Brits, fearful of Russian influence, decided to impose a friendly and malleable figurehead on the country and proceeded to replace the popular Dost Mohammed with their own dissolute and corrupt puppet, Shuja Shah. Realising that Shah would never survive alone, 10,000 troops were dispatched to support his regime and local warlords were bribed to keep their peace. It didn't last. In the Autumn of 1842 the Afghans rose up, besieged the Kabul cantonment and threw the Brits out. In the subsequent withdrawal through the snow of the Jugdulluk & Khyber passes some 16,000 British and Indian troops and their camp followers were massacred. 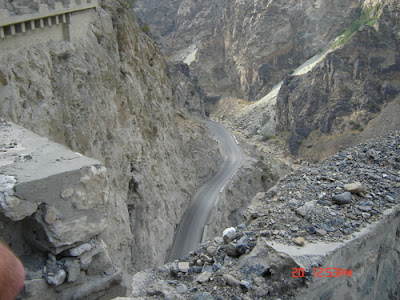 If you are ambushed here in the passes, as the Brits were, there is nowhere to run. What a place to die.

Of all those who left Kabul Dr William Bryden was the only man to ride into safety at Jalalabad. This famous painting by Lady Butler provides a fanciful impression of his salvation. 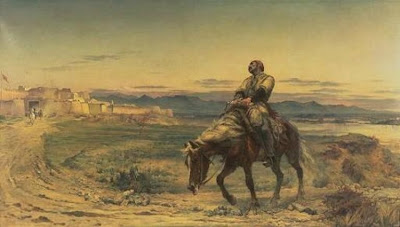 Of the many who died one at least is commemorated in Cumbria, at Wreay, near Penrith, where stands, surely, the most extraordinary church in the County, a fantasy of styles drawn from across Europe. 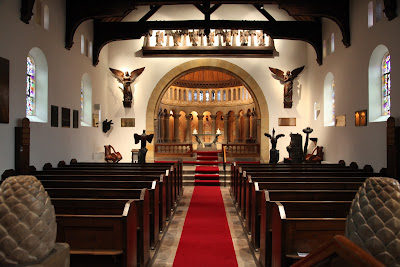 The church which replaced an earlier structure was designed and built by Sarah Losh, (1785 - 1853), the daughter & heiress of a local landowner, drawing on architectural features that she had encountered whilst on a 'Grand Tour' with her sister, Catherine, about 1817. The basic form is that of a classical Roman Basilica. All the work was done by estate servants; the wood carving in particular is spectacular with its angels, birds and animals. Sarah never married but she was clearly a woman education and taste. 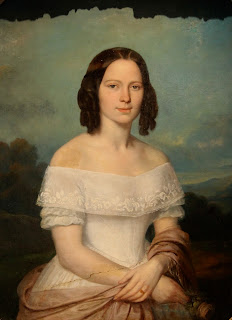 Looking again at the photograph of the nave there are two carved pine cones, symbolic of eternal life, at the edge of the pic. Others can be found elsewhere in the church. The choice is deliberate, for in the corner of the graveyard is an enclosure containing the burials of the Losh family and their friends and other memorials concentrated here from the cleared graveyard. Among these is another large pine cone and an inscribed block of stone that originally stood beneath a tree, now long gone. The inscription reads ... 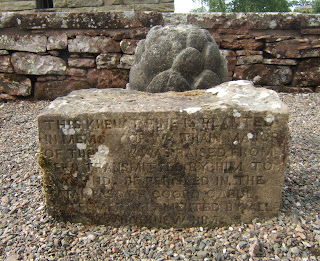 This Kheuat Pine is Planted
in Memory Of W Thain, Major
of the 23rd Ft. It Was Raised
From Seed Transmitted by Him to
Friends. He Perished in The
Fatal Pass of Coord Cabul
...... ..... ..... Lamented by All
Who Knew Him

Thain died in the snow of the Jugdulluk pass. He was a close friend of the Losh family and had fought with a Colonel Elphinstone at Waterloo where he was slightly wounded by grape shot near La Haye Sainte while serving as Adjutant of the 33rd Foot in Halkett's Brigade. Is this the same Elphinstone who led the retreat from Kabul?

Apart from the pine cones Thain's death is also believed to be commemorated by the recurrent symbol of the arrow which is a striking feature of the west door of the church. 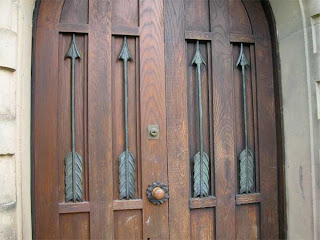 The fatalities of the First Afghan War were commemorated in India by the building of the church of St John in Bombay (Mumbai) where the many names - of Officers - are listed. Forgotten men from forgotten wars.

Here is a short film of St John's church today, a relic of Empire.