Return to Clifton - The Last Battle on English Soil

By far the most popular posting on this blog is that which describes the Battle of Clifton ... The Last Battle on English Soil. I recently found myself driving down the old road and took the opportunity, with my mate Rod, to take some more pictures of Battle memorials in the village.

Herewith is a close-up of the dedication plate on the stone put in place below 'The Rebel Tree' by the Goodchilds in 1936. 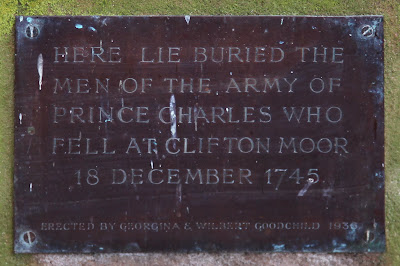 There is also a dedicatory plaque placed on the renovated fence and gate by Scots patriots around the millenium.

In Memory of Fellow Scots Who Lie Here in Foreign Soil.
Never Forgotten.
Prosperity to Scotland And No Union. 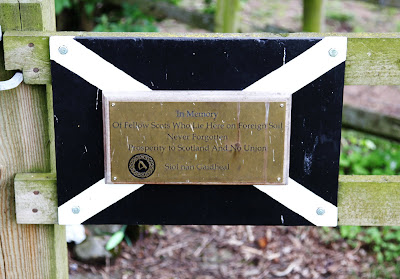 On the east side of the A6, just a few yards south of The Rebel Tree, lies an ancient Holy Well, now enclosed and 'made safe' in true Health and Safety fashion. It appears that this too was adopted as a further battle memorial. 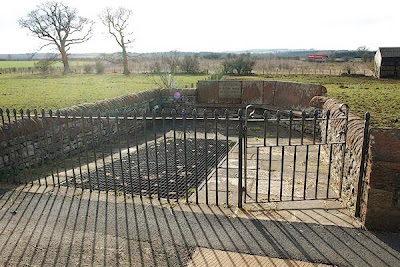 It has two plaques built into its fabric. 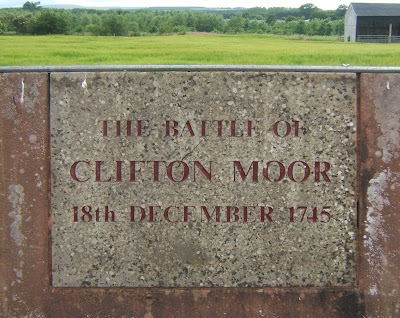 The allusion in the inscription below to a tree planted in 1995 on the 250th anniversary of the skirmish is confusing. There is no tree anywhere close by so I guess this plaque has been relocated to the well's enclosure from elsewhere. 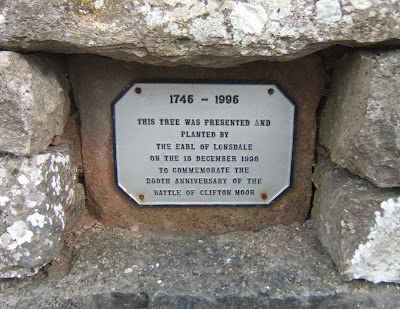 Email ThisBlogThis!Share to TwitterShare to FacebookShare to Pinterest
Labels: Jacobite