As a consequence of travelling round the county of Cumbria I have acquired a considerable collection of church guides. Written by vicars or local enthusiasts they describe the origins and history of the buildings, windows, artifacts but rarely war memorials. They are seldom valued as objects of craftsmanship. Thus it was rather nice to visit Calthwaite church and discover quite a comprehensive description of the memorial in the church guide.

The church, designed by JH Martindale Diocesan surveyor for Carlisle, was only built in 1913. It is a lovely building, quiet and peaceful and contains some magnificent wood carving done by George Fendley of Warwick Rd, Carlisle. 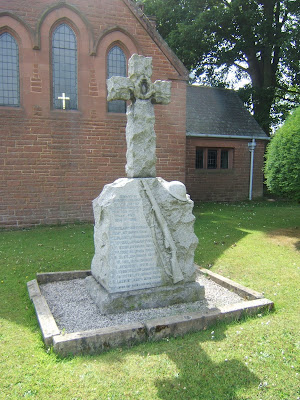 The war memorial is another example of the work of Beattie of Carlisle. 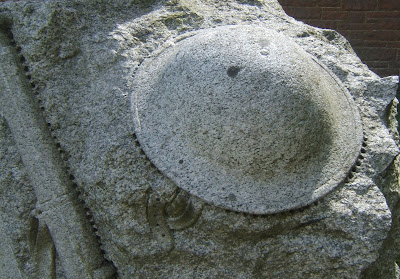 Close examination provides a glimpse of the way in which the rifle and helmet were drawn out of the Aberdeen granite. The sculptor drilled holes around an outline allowing the detail to be isolated and worked on.

58 Calthwaite men joined the armed forces of whom 12 were killed in action ... The Memorial was unveiled on Sunday afternoon, 16th January 1921, by the Earl of Carlisle, who lived at Calthwaite Hall as a boy and had no doubt known many of the men commemorated. The service, conducted by the recently instituted vicar, The Rev WW Farrer, was short, simple and impressive. ... The congregation sang the hymn 'The Saints of God' and then went outside to gather round the memorial. Lord Carlisle reverently withdrew the Union Jack which covered the inscription, and the vicar and Mr Reece offered dedicatory prayers. Two buglers from Carlisle Castle sounded the Last Post.

Charlie Foster, one of the men commemorated, was the son of the headmaster of Calthwaite School, who recorded his death in the school logbook in October 1917, adding the comment 'No singing today as master not in singing mood'.

Such grief from war. For what?