Pretty impressive place, the Lake District. Had a drive out yesterday to reconnect with the fells after two weeks with my daughter in Pompey; Hampshire is a very different, more gentle landscape. Up here the hills are magnificent. Among the better known is the pyramid of Great Gable at the head of Wasdale. 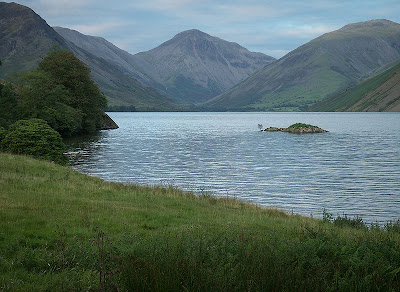 It really is an impressive lump of rock, owned by the National Trust and a War Memorial! 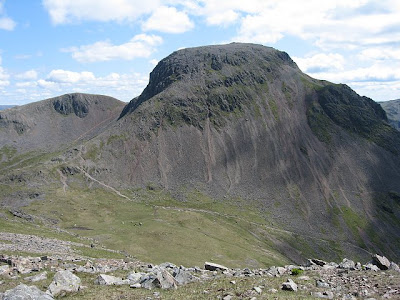 Every year people make their way to the summit on Remembrance Sunday for a service and to lay crosses and wreaths around a bronze plaque at the summit. 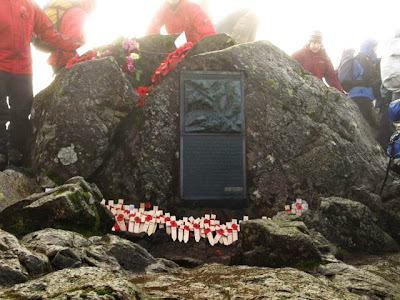 The plaque was designed by William Gershon Collingwood and depicts the hills around Great Gable in relief. It was unveiled on Saturday June 8, 1924 by Dr Wakefield, President of The Fell & Rock Climbing Club of Great Britain to the memory 20 of its members who were killed in the Great War. Great Gable lay at the centre of a huge swathe of central Lakeland that the club had bought and given to the National Trust as a memorial.

It was a typical Cumbrian summer day, thick mist and driving rain but even so some 500 - 600 people were on the summit. The dedication was read by the Quaker, Geoffrey Winthrop Young of Heversham and Cartmel who lost a leg as second in command of a (French) Friend's Ambulance Unit based at Dunkirk. He had been in France from the last day of October 1914. The article in The Times describing the unveiling can be seen below - click to open.

What an amazing view from the summit! If you're looking at this from the US of A, Canada or anywhere else - come and take a look! 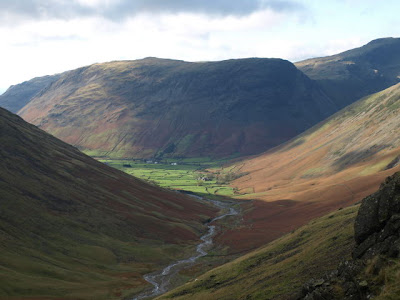 Hi...you contacted me a while back about my Cumbrian Church blog....I have a couple of photos you may be interested in. One of the K Shoes war memorial in Kendal, and one of the Gilbert Gilkes war memorial....also in Kendal.