Check out this posting for more pics.

War has been endemic in the history of Cumbria; the blood of many people has flowed into its soil not least as a consequence of its being the borderlands between two sovereign nations.


A reminder of the turbulent politics of the 17th & 18th centuries that followed the Union of the two Crowns is to be found in St Cuthbert's churchyard, Clifton, south of Penrith where a memorial commemorates the dead of Bland's Regiment who were killed here on the occasion of the skirmish at Clifton, fought on the afternoon and evening of December 18, 1745. The stone resembling a standard CWGC headstone was placed here in 2004 by The Queen's Royal Hussars, the lineal regimental descendants of Bland's Regiment. 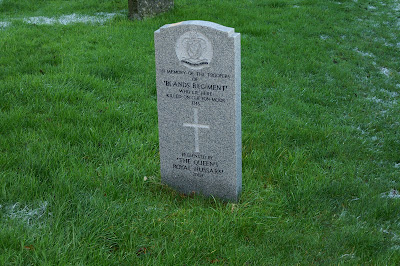 The skirmish at Clifton, which is commonly celebrated as the last battle fought on English soil, took place between a rearguard of Prince Charles Edward Stewart's Jacobite army as they retreated from Derby and elements of the Duke of Cumberland's Hanoverian forces that were in pursuit. During the action about a hundred government soldiers were wounded and killed, ten of whom lie beneath this memorial. Twelve Jacobites, Scots Clansmen, were also killed and a Captain Hamilton captured 'much wounded'. The dead are buried beneath The Rebel Tree on the southern edge of the village. At the foot of the tree a brass plate mounted on a stone reads,
Here lie buried the men of the army of
Prince Charles who fell at Clifton Moor 18 December 1745 A footnote makes clear that the plaque and presumably the stone were placed here by Georgina & Wilbert Goodchild in 1936. But who were they? A Wilbert Goodchild was a celebrated mineralogist in the mid years of the 20th century - was he a closet Jacobite?

The tree remains as a site of pilgrimage for Scots, there are always posies of flowers & heather at the foot of the memorial. In 2006 a group of patriots cleared up the site, rebuilt the fence & dedicated another memorial plaque - see this link for the full story.

Googling 'Battle of Clifton' will throw up numerous links describing events. A particularly interesting eyewitness account written by the Quaker,Thomas Savage of Clifton End Farm, can be found here. One of the better published accounts was that of the Chevalier Johnstone of c1820. This wonderful book contains a map of the battle. 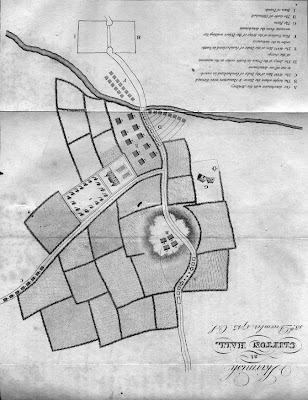 It is rather confusing. In the book south is at the top so I have rotated it 180 degrees. In addition the distance between Penrith, Eamont Bridge and Clifton has been truncated. However, if you download the map and compare it to Google Earth the events can be traced on the modern landscape.

By coincidence the Rev. Robert Patten a former curate in Penrith & chaplain to General Forster in the rebellion of 1715 was buried in Clifton church in 1733. Forster commanded the Jacobite forces under the Earl of Derwentwater.

There are few reminders of the Jacobite wars in Cumbria apart from a variety of blue plaques commemorating lodging places of the Bonnie Prince or Butcher Cumberland. The mediaeval choir stalls in Carlisle Cathedral are quite heavily disfigured by crude carvings of symbols and initials. When I was a schoolboy in the town the verger at the time seemed undecided as to whether these were done by 16th century Reivers, Jacobite prisoners or by captured Royalist soldiers during the civil war. I don't know what present thinking is. In Lancaster Castle there are a number of long wooden staves that were apparently left in the town by retreating Highlanders some days before Clifton skirmish; poignant reminders of a forgotten war.

The transactions of the CWAAS for 2003 (Third Series, Vol III) includes a paper on the siege of Carlisle in the days following Clifton skirmish and the 2006 edition describes the events of the '15 in the county. Copies may still be available through the website. The Centre for North West Regional Studies @ Lancaster University have also produced an account of the Jacobites in the North West available thro' their website.

Email ThisBlogThis!Share to TwitterShare to FacebookShare to Pinterest
Labels: Jacobite