As the 90th anniversary of the armistice approaches this rather inadequate blog becomes especially poignant.
In the 1980s I put an article in the Manchester Evening News requesting information about the 16th Battalion, Lancashire Fusiliers - 2nd Salford Pals - the unit with which my Grandfather, James Arthur Wilkinson, was serving when he was killed on the night of May 28th 1918. I got a few replies informing me of the names and addresses of a few surviving veterans. One such was Bill Dutton formerly a Sergeant in the 15th Bn LFs, 1st Salfords. Aged about 94 he lived on a council estate in Salford, pretty much staying in his kitchen drinking tea, puffing on a broken old pipe and relying on neighbours for meals. He told lots of tales and also extracted a promise from me.
Bill had joined the 15th LFs in August 1914 with a bunch of pals. Among these was Percy Morrell Fensome, his best friend. They trained together through 1915 before going out to France at the back end of the year. In June of 1916 they had an argument and fell out. Then Percy was injured and went to hospital. However, on the night of June 30th as the Bn gathered in the front line trenches below Thiepval Ridge, Percy reappeared. He had wangled his way out of hospital to join his mates as they went over the top in 'The Big Push'. Making his way to the front line he looked out his best chum, Bill Dutton. In the previous week Bill's mother had written telling the pair of them to be friends. So there, in the trench looking out over no-mans-land, they hugged and made up.

Bill & Percy never met again. On the following morning, July 1st 1916, Percy was killed by machine gun fire while Bill spent the day in a shell hole before crawling to safety as night fell.
In 1923 Bill got on his bike in Salford and cycled to the Somme to try and find Percy's grave. He went back many times over succeeding years with the same purpose, finally giving up the search when he was approaching 70 years old. Percy's body was never identified; his name is on the Thiepval Memorial to The Missing of The Somme.
While we sat in that kitchen together in 1986 Bill, tears rolling down his cheeks, gave me this photo of his pal in his boy-scout uniform and I gave him my word that I would always do all I could to keep his old friend's memory alive. 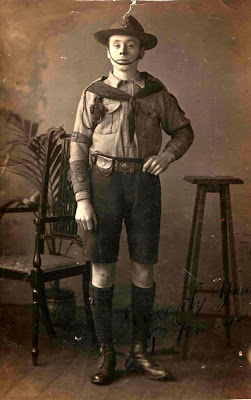 So I have told the story again and now Percy is in cyberspace for the whole world to see.