Drowned on the Lusitania

It is too easy to imagine that all the casualties of war are military; men and women who signed up for service in the full knowledge of the dangers they faced in or around combat. However, the wars of the twentieth century were total wars engaging entire populations and vast numbers of civilians were killed.

One of the seminal events of the Great War was the sinking of the Cunard Liner RMS Lusitania on May 17, 1915 off the south coast of Ireland while making her way back to Liverpool from New York. Torpedoed by the U Boot U-20 she sank in 18 minutes with huge loss of life. Of 1,959 passengers aboard, 1,198 drowned. Many of the dead were Americans, people of wealth and influence. Indeed, the ship's sinking contributed to the United States eventual entry into the war. 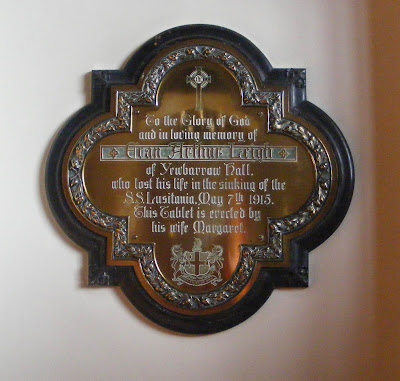 In the parish church at Grange-over Sands there is a small plaque commemorating Evan Arthur Leigh of Yewbarrow Hall who was one of the dead. He was born on 28th April, 1850 the son of Evan Leigh of Newton Square, Manchester. After attending Mill Hill school he became an Engineer and Merchant of the firm of Leigh and Butler, Boston, U.S.A., and Temple Chambers, Brazenose Street, Manchester, and founder of E.A. Leigh & Co., 196, Deansgate, Manchester.

He was a major benefactor in Grange.

For details of the Lusitania disaster and a history of the ship start out at http://en.wikipedia.org/wiki/RMS_Lusitania
Posted by Louis at 11:43