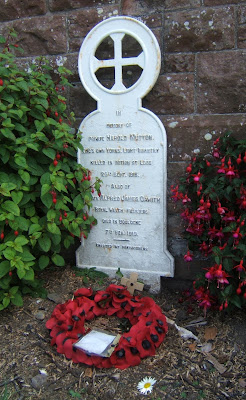 "This simple, yet poignant, little memorial has always fascinated me ever
since I first noticed it about fifteen years ago. It tends to get hidden by
the fuschia during Spring and Summer !!

The Private Harold Mutton listed on it can present the war memorial
researcher with a bit of a puzzle.

However, being intrigued by this discrepancy, I did a bit of digging and
found that he had, in fact, been transferred to the KOYLI from the Border
Regiment and was serving with them when he was killed during the Battle of
the Somme. Hence, he should be commemorated on the Thiepval Memorial!!

I have passed on my findings to the MoD to have his commemorative details
corrected but there is no response from them as yet."