My family's story of Remembrance

I know this blog was supposed to be about Cumbrian War Memorials, and mostly it still is. But you must forgive me if I slip in one or two postings about other stuff around the general theme. Yesterday I went to the cross at Ulverston and watched the Ceremony of Remembrance. That was after watching The Cenotaph on TV in the morning. On the Saturday evening I had also watched the Festival of Remembrance. Overkill you might think. But I find it all intensely moving.

When I was a child watching the Festival of Remembrance with my family was the most important event in our year. We sat in the lounge with a big open fire and sang the old, familiar songs of The Great War with Ralph Reader. Indeed Remembrancetide, as my gran called it, was far more emotionally charged than Christmas. In May 1918 my grandfather was killed in France. On 19/20 December 1941 my mother lost her only cousins, Harry & Cliff Waterworth, when their ship HMS Neptune was sunk off the Libyan coast (see http://www.hmsneptune.com/ ). Their father, Harry, my gran's brother, died of a broken heart soon after. 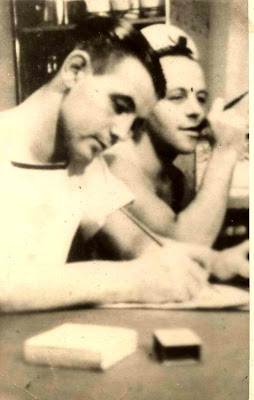 The last photo of Harry & Cliff aboard the Neptune. Writing home to their young wives, Sally & Doreen.

My own father fought with the 50th Royal Tank Regiment from the Battle of Alam Halfa in July 1942 through Sicily & Italy and on into the Greek Civil War. In Athens in 1945 he had the job of scraping the blasted remains of George Sprackland, his driver and dearest friend, off the side of a building and shovelling him into sandbags. How do you deal with that?? 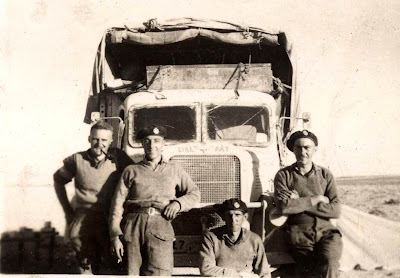 My father is extreme left, George second left. In the Western Desert, 1942.

This spot of film shows a few of the appalling events of the Greek Civil War, probably in Athens. The Tanks are perhaps of my father's unit who reclaimed their armour after a brief period as infantry.

So now when I watch these the events of Remembrancetide I am again with my family. I feel the presence of Sarah Elizabeth Alice my lovely gran, Claribel and Harry, my mother & father. What a man he was. A wonderful guy and an amazing Dad. At this time I miss them though they have been dead 20-30 years. I never valued them then.

I personally feel that Blair and others who voted on a lie for our involvement in America's wars, including John Hutton, my illustrious MP, should be made to spend a month with the families of war dead before sending boys out to kill & be killed. I loathe them for what they do in my name.