Through the course of the nineteenth century the established church struggled to find a place for itself in an increasingly secular society. The encounter with mass death of 1914/18 propelled it centre stage and by 1919 onwards it had regained its place as a primary repository of memory. I do struggle to understand the dynamic which prompted small communities to invest relatively large sums of money in lych gates, but I guess they are appropriate. In mediaeval times the coffin would rest here prior to being given Christian burial, a final farewell. In the years following the war each new generation of a village or parish would pass the names as they made their rites of passage thro' christening, marriage and death.

There are considerable numbers of lych gates in the county. That at Plumpton on the old A6 south of Carlisle is particularly attractive. It stands at the approach to the delightful Deco church of St John the Evangelist built 1907 in a beautiful creamy sandstone to a design of Sir Robert Lorimer. Always locked but must get in; it has a Morris window! 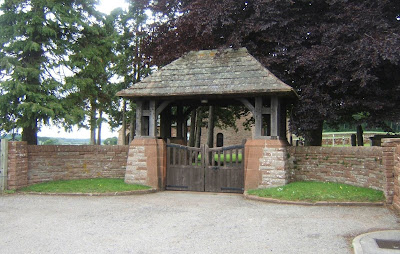 A slightly less ambitious affair is this memorial gate at New Hutton a lovely quiet spot above Kendal. 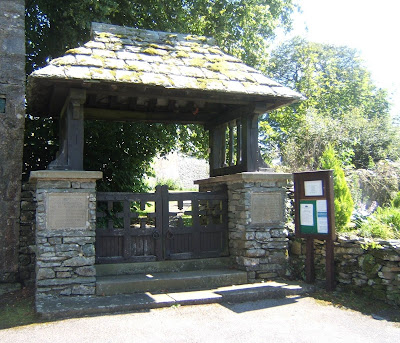 Set at the village end of a long church approach it has two panels, a dedication and a short list of names. Within the Webster church of 1828 there is also a small wooden cross with name brasses and formerly an organ (see earlier posting!). I believe there is also a roll in the village hall, but I have never managed to get in to check this out 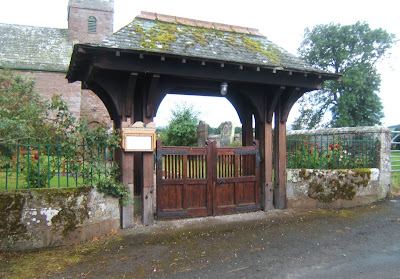 An old boy of Sherborne School, he was killed in Mesopotamia on April 24 1916 aged 31. His name appears on the memorial to the missing at Basra - clearly his body remains unidentified somewhere in Iraq, a long way from the hills and fells. His parents William & Eliza were of Langham Tower, Sunderland though an inscription on this memorial describes him as being of 'Greenfoot', presumably near Sebergham. I know nothing more of him.

I was talking to a friend earlier this week who once did a Master's in Law. He observed that such as memorial brasses, windows or lych gates might be tax deductible; churches are, and were c1919, charities! Adds another dimension to theories of altruism and the 'gifting' of memorials!