There are many sad stories associated with memorials throughout the county - pretty obvious really. But when I was first getting involved in them I found one which seemed to say a lot about the way in which the dead of the Great War were remembered until quite recently. To all intents and purposes they were largely forgotten - and indeed many, including this guy, still are. Nor is it everyone who treats memorials with the respect that they deserve.

In Ulverston cemetery there are quite a number of family headstones & gravemarkers that bear the names of men who died during, or as a consequence of, the Great War. One such is this neglected memorial to the McGuire family. 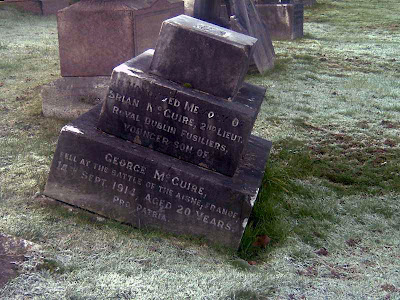 The memorial itself is broken. The cross which originally surmounted the base, & which has vanished completely, probably fell as the monument sank into the grave. Upon the base can be read the words;

How sad that it is so neglected. But it seems that there was probably no-one to care for it.
Brian's father died on May 8, 1899 aged 37 and is buried in this plot with Eleanor, Brian's grandmother, who died August 3, 1880 aged 50. In his working life George was Town Clerk of Bradford. Brian's medal card shows that his mother, Florence Hannah, remarried becoming Mrs Craven. She probably lived at Collingworth, Yorkshire in 1914/15 and later in 1917/18 at Beaufort Mansions, Chelsea. By the early '20s she was at 'The Bungalow', Freshwater Bay, Isle of Wight. 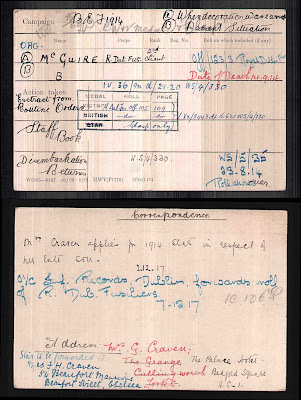 Young Brian McGuire is buried at Vauxbuin, a concentration cemetery adjacent to large French and German war cemeteries. It was established after the armistice and contains close to 300 British dead of which 162 are identified. These bodies, mostly of 1918 casualties, were brought in from about a dozen dispersed burial sites around Soissons. Interestingly the CWGC website indicates that one grave at Vauxbuin contains the remains of a man killed in September 1914 and whose initial burial place was at Pargny-Filain, a German Communal Cemetery. Was this Brian McGuire?

I briefly checked on the web to see whether Brian McGuire is listed on Bradford's Memorial and was appalled to discover that a week before Armistice Day, 2008, many of the bronze plaques naming the dead had been ripped off the memorial and stolen.

Brian McGuire is commemorated on the War Memorial in the village of Cullingworth, near Bradford, West Yorkshire.