A gem of a memorial

Memorials, specifically of the Great War, reflect perceptions of purpose. People agonised over designs and details when trying to decide how best to commemorate the men of a community who had served or died in defence of King and Country. In many there is a poignancy in their naive execution, whereas others are sophisticated things, professionally created by artists of high repute.

One such is this Roll of Honour in the county. It is a wonderful piece of work. When I first came across it I was astonished, a real discovery. It is signed Jessie Bayes, but who is she?

Jessie was the youngest of four children born to Alfred Walter Bayes R.A. (c.1832 - 1909) & his wife Emily (nee Fielden) of Todmorden. Alfred was an Etcher, Engraver & 'Painter in Oil Colours', specialising in portraits, biblical subjects, landscapes and angling scenes. Daydreams is one of his paintings. 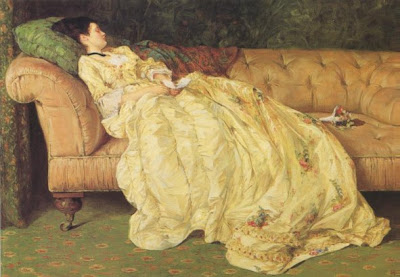 Alfred & Emily's children were: Emmeline (born London, c.1868), Walter John (1869-1956), Gilbert William (1872-1953) and Jessie (1878-c.1940). Three became artists.
Walter studied at the City and Guilds Technical College, Finsbury 1886-1900 and then at Westminster School of Art, 1900-2. He was a founder member of the Camden Town Group and of the London Group of Artists. He married his model, Kitty Telfer, in 1904.
He was Art Critic of the Athenæum (1906-16), a highly regarded teacher as the Headmaster of Westminster School of Art (1918-1934) and Lecturer on perspective to the Royal Academy and Slade School and Director of Painting at Lancaster School of Art. During the Great War he painted many pictures of the conflict such as The Underworld. London Tube c1917. 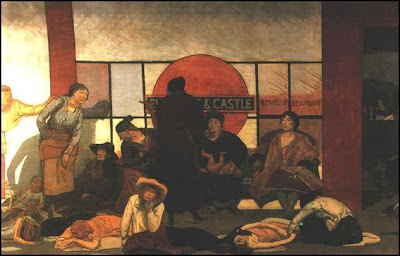 Gilbert was primarily a sculptor in Bronze and an architectural and monumental designer. Studied at the City and Guilds College, Finsbury, the Royal Academy Schools, 1896-9 and in Paris. He married fellow sculpter, Gertrude Smith, in 1906. He designed many medals and trophies including the Great Seal of King George V and the Seagrave Trophy. Other work includes the Great Clock at Selfridges Department Store in London (1931), the stone relief of sporting figures (1934) outside Lord's Cricket ground, History of Pottery through the Ages for the headquarters of Doulton’s on Albert Embankment, London (1938) and History of Drama through the Ages for the Saville Theatre (now the MGM Cinema), Shaftesbury Avenue. In 1935 he designed a medal to commemorate the launching of the new Cunard ocean liner, the Queen Mary.

From 1939-44, he served as President of the Royal Society of British Sculptors.
After the Great War Gilbert designed a number of War Memorials, notably that at Broadstone, Dorset (detail shown here). 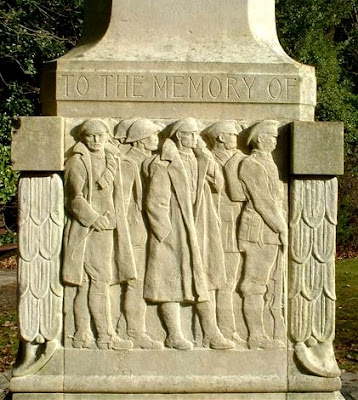 Others can be seen at Holme Lacey, Herefordshire, Todmorden, Yorkshire and at Aldeburgh, Suffolk. Other work can be seen in St. Mary's Church, Hampstead, London and monuments in bronze can be seen in St. James Churchyard, Warter, Yorks, to G.V.Wilson (1909) and Lord Nunburnholme (1910). There is also a statue (with W.C.H.King) of philanthropic industrialist Robert Owen in Newtown, Powys. All of these can be found on the WWW.
And finally, Jessie 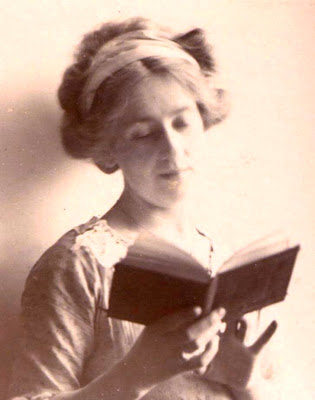 She was born at Hampstead, London and as her brothers established themselves as artists she went to work at the Prudential Insurance Company earning £40 per year. Rescued by her brother Gilbert who financed evening classes for her at the Central School of Arts & Crafts she soon made a name for herself as a miniature painter and designer in the Arts and Crafts style and was elected a member of the Royal Society of Miniature Painters, Sculpters and Gravers (RMS) in 1906. From 1908 she exhibited at the Royal Academy .

The roll which so impresses me is made on a wood base with plaster embellishment in the style of a vaguely late mediaeval altar piece or icon. The flanking columns have relief renaissancesque decoration and above and below the list of names there are figures of angels and St George slaying the dragon. 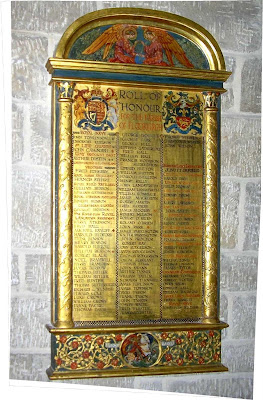 The angel figures are taken pretty much direct from works such as Fra Angelico's fresco, The Annunciation, of 1437. 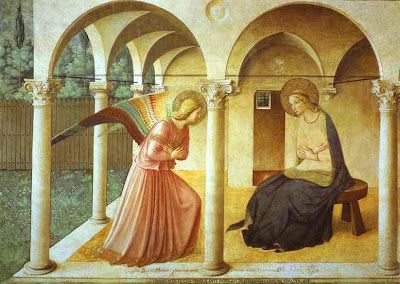 The detail of St George is delightful. 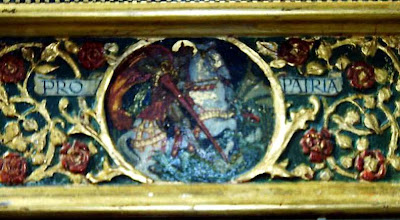 Above the list of names, arranged by Regiment, are the armorials of (probably) King George V and of the ancient Borough to which the long list of names of the men who served and died belonged.

I apologise if I offended.
Posted by Louis at 19:35

"I'm not precious about the pics - they are there for all - download them as you will, but a mention/link would be nice if you use them online."

Fair enough, but as most of the info and pictures about the Bayes family was taken off my website, I would appreciate a mention too.