Looking at the many war memorials through the county it is self evident that in almost every instance vastly more were killed during the Great War than in the second World War. Indeed, quite a few communities seem to have suffered no losses between 1939 -45.
At Selside, a small fellside community on the southern approaches to the Shap fells, a roll of honour and a brass plaque were erected after 1918 listing all who served and died. 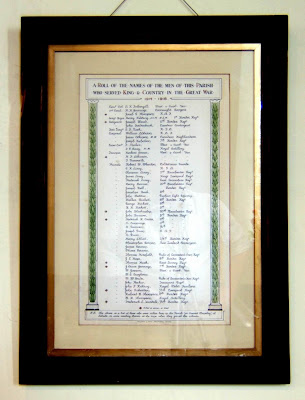 No names were added after 1945 giving the impression that the village escaped fatalities in the later conflict. However, this was not the case.
On 12th May 1944, 25 year old Nathan Harker Leach, a driver in the Royal Corps of Signals, died of wounds in Italy and is buried in the Commonwealth War Graves Cemetery in the countryside south of the town of Ancona. He was probably wounded in the Eighth Army's advance up towards the Gothic Line during the spring of the year. My own father was part of these actions.
Nathan was the son of Thomas Ellwood & Mary Leach of High Borrowbridge, Selside. Thomas was the local road mender - a man of low social status. For some reason his son's death was not commemorated in the community.
A few years ago I was sunning myself by the ancient church of St Anthony, Cartmel Fell and struck up conversation with a couple of guys, clearly gentry, one of whom hailed from Selside. It appeared that some years before one of these guy's had, I think at his own expense, paid for a memorial for young driver Leach. 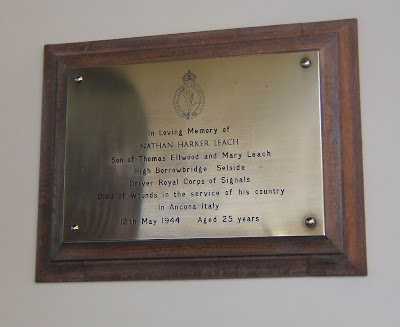