I was watching TV a few weeks ago, one of the many second rate reality shows that wastes hours, time & energy. This one featured a young dentist with a lot of dosh looking for a house somewhere round the Lakes. He finally put an offer on an impressive Victorian mansion at Temple Sowerby, a delightful village at the west end of the Stainmore road approaching Penrith. I was reminded of a trip out a few weeks earlier when I had traced most of the memorials in the same village. During this trip I was lucky enough to meet a local farmer and his wife who were happy to fill in some details. At one point we stood by her front gate and she pointed to a house by the main road, the same that appeared on the TV programme, and pointed out a huge tree in its garden, soaring above all the others around it.

Apparently this tree, a Wellingtonia or more properly the North American Giant Redwood - Sequoiadendron giganteum - is one of four that were planted in a long line running north-south across the village. The best seen is that which stands at the entrance to Acorn Bank, a National Trust property standing some way north of the village. 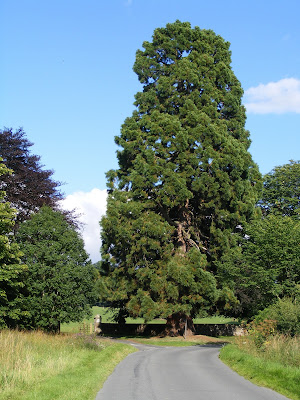 A War memorial? Don't know, but the lady I spoke to said that the trees were planted to celebrate the Battle of Waterloo. The tree's seeds were first cultivated in Britain in 1853, Waterloo was in 1815. Maybe they were planted to commemorate Arthur Wellesley, the Duke of Wellington after whom the tree was named in Britain and who died in 1852.

Maybe somebody out there knows the full story.
Posted by Louis at 22:37

Email ThisBlogThis!Share to TwitterShare to FacebookShare to Pinterest
Labels: Napoleonic

Yes, I agree with you, it is more likely they were planted as a commemoration of the death of the Duke of Wellington.

There is a British Redwood/Wellingtonia enthusiast's website with lots of information about these trees and their presence in the UK.