A Hero of the Confederacy

Just borrowed a book from the library 'The Stained Glass in the Churches of the Anglican Diocese of Carlisle', by Leslie Smith. I've bought a copy too, at a reasonable price from ABE Books, but it's not arrived yet! When I get books like this it's quite frustrating because I realise how many memorials I have missed - although there are one or two the book has missed!! I did it again this last week when visiting St Cuthbert's church, Cliburn - which prompted a return visit today. 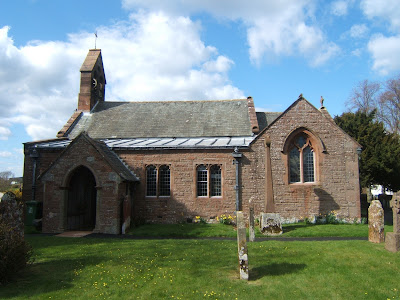 What a lovely little church with the modern wayside cross on an ancient base.

The book tells me that there is a small stained glass window in the north wall of the sanctuary. It has two small flags in front of it, one an odd stars and stripes - confederate? - and the other listing the names of a series of battles from the American Civil War... 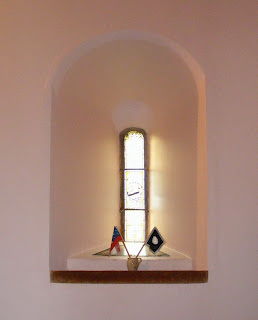 In the book the window is described as having 'Florets in gold, fleur de lys of the same, a Coat of Arms & Motto...'. Though unsigned and undated it is listed in the catalogue of Cox & Sons of London, later to be Curtis, Ward & Hughes.

The window was inserted to the memory of Confederate Major General Patrick Ronayne Cleburne, killed at Franklin fight, November 1864. 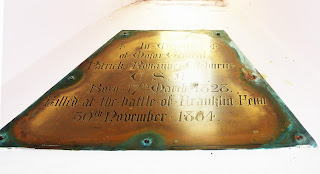 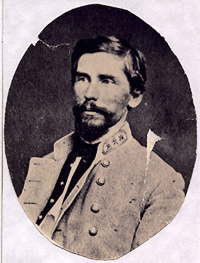 There is an awful lot about the General on the web - start here or at Wikipedia here! Rising from the ranks he was called the 'Stonewall Jackson of the West' & fought in many of the iconic actions of the American Civil War; Shiloh, Chickamauga, Missionary Ridge, et al. You can even buy computer games and re-fight his battles.... 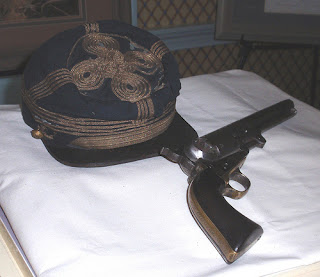 Among the mass of info available on the web across the pond is this picture of his kepi & pistol.

The Wiki page describes him as being Anglo Irish, born in County Cork but the family lived in Cliburn and the Eden Valley for some four centuries. There are a number of other Cleburne memorials in the church including an undated armorial window with figures of Christ & the Magdalene and another to Cuthbert Lowther Cleburne, died 1870 as an infant in the USA. And just across the lane outside the church there are the much denuded remains of Cliburn Hall, the family home from the 14th century, seen here as it was in the 19th century 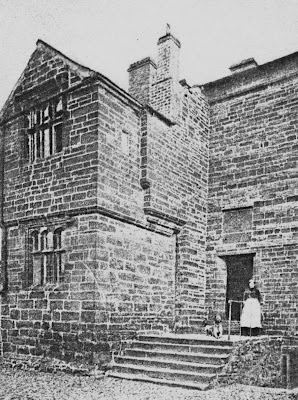 There is a further American Cleburne memorial brass attached to the font cover ...

The church is fascinating; there is a cut-down Roman altar built into the porch and the south door is clearly very early. These ancient doors are often in evidence in the north of Cumbria and I often wonder whether they are pillaged from one of the many Roman buildings that must have littered the landscape in the 10th & 11th centuries.
Posted by Louis at 21:27