A matter of status at Barbon.

I have made the point in other postings that many memorials of the Great War and earlier were unequivocal statements of status. In the post war years the class divide in the shires of England was still pretty rigid. There was a degree of social mobility, through education, plain hard graft or through marriage but most people still lived and died as they were born. At Barbon there are three memorials that stand as examples of this social divide and the ways in which families bridged it. Each make very different statements about 'their man'. 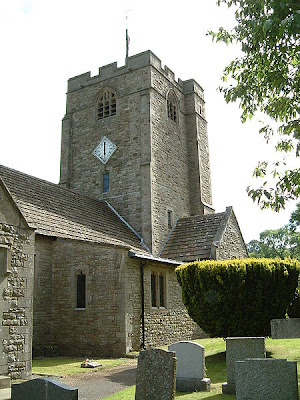 St Bartholomew's church lies at the the western end of lonely Barbondale, which itself leads to Dentdale and on into The Yorkshire Dales. It is a beautiful church of 1893, the best of Paley & Austin and always closely associated with the Kay-Shuttleworth family who had a house close by.

Inside are a number of windows, all except one (by Powell) being the work of Shrigley & Hunt of Lancaster. One of these is a memorial to Claude Gifford Jeffery, Captain, 2nd Bn Princess of Wales Own Yorkshire Rgt, killed on 24 October 1914 aged 34. 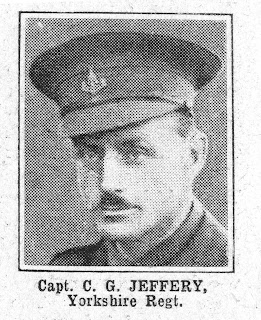 Jeffery was a regular soldier, he had joined the army in 1901 and served throughout the South African War. His unit landed at Zeebrugge on the 6th October 1914 as part of the BEF, the contemptible little army that Britain put into the field at the outbreak of war.On the 22 October he was wounded in the groin leading an attack near Becelaire, Belgium and died in hospital two days later. See here for more details. 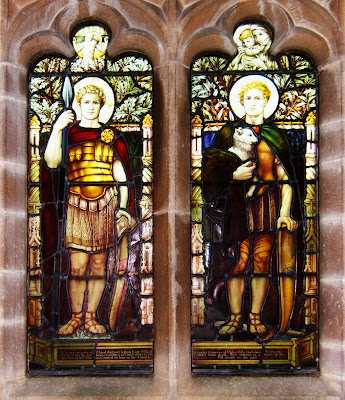 The window was provided by his wife Nellie, nee Anketell-Jones, of Coldingham, Winchfield, Hants  whom Claude had only married in the early months of 1914. It depicts two allegorical classical figures; of Fortitude with spear and shield surrounded by oak leaves, & Pax bearing a lamb beneath a canopy of laurel. Above are the figures of the crucified Christ and a Madonna and child, perhaps in reality Nellie holding her and Claude's baby daughter. Captain Jeffery was of a middle class professional family,  'the middling sorts', as academics describe them. His father, Herbert, was a Bradford solicitor and public notary. His wife's family were probably minor Irish gentry.

The window is unpretentious and, lacking armorial or Latin inscription, it does not exclude the commonality. It is a simple statement describing the virtue of the man and sentiments of loss. Its middling status is in its existence; such windows did not come cheap. Only those having some wealth could afford even a relatively small window such as this. I don't know why it is here at Barbon.

The second memorial is altogether different. In the churchyard, to the east of the church there is an enclosed garden/cemetery plot. This is the private burial ground of the Kay-Shuttleworth family. See here for their full story. The Kays were a family of no great note but in 1842 James Kay, a self made Rochdale man, married Lady Janet Shuttleworth of Gawthorpe, sole heiress of an ancient Lancashire family. James assumed his wife's name and arms. Through ambition, hard work and astute mating he was now an elite.

Within this patch of ground are a considerable number of memorials and gravestones commemorating members of the extended family. At its centre is a stone cross. 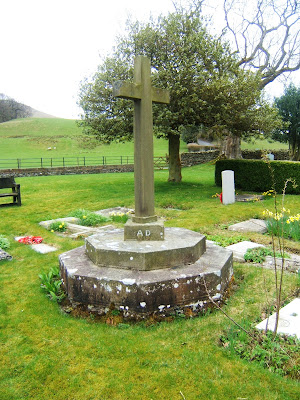 Around the side of the pedestal on which it stands are carved the names of Captain the Hon. Lawrence Ughtred Kay-Shuttleworth, 'D' Battery, 11 Brigade, RFA and Temp Captain the Hon. Edward James Kay-Shuttleworth, Rifle Brigade. Lawrence married Selina Adine Bridgeman, grandaughter of the 4th Earl of Bradford and was killed near Vimy on 30 March 1917. Edward - Eton & Balliol - married Sibell Eleanor Maud, daughter of  Chas RW Adeane of Babraham Hall, Cambs, a family related by marriage to many of the higher nobility. He died at home and was buried here at Barbon. Both men were Barristers.

The memorial is quite subdued but there was no requirement for ostentation. The family effectively owned the village, their status was taken for granted and well understood. Even so the cross has its Latin, speaking only to the educated, and its position in an extensive and private family plot proclaims the exclusivity of the named dead.

Third and last is an aspirational brass plaque erected in memory of Thomas Arthur Airey. A difficult memorial to photograph even with Rod's camera! 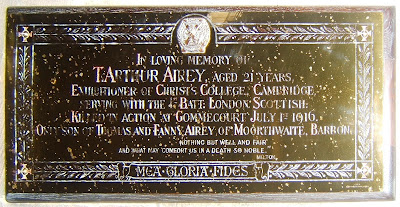 At the top, within a border of laurel, is the cap badge of 1/14 London Regiment, London Scottish. Beneath this is the inscription;

Young Thomas Airey died in the mass slaughter of the 'diversionary attack' at Gommecourt on the First Day of The Somme. He has no known grave.

When I first discovered this memorial I read it, took notes and moved on thinking sad thoughts about this young Officer. Only later did it dawn on me that there is no mention of rank. Thomas Arthur was in fact a private soldier but the memorial with its quote from Milton, use of Latin - My glory assured - and description of scholastic achievement is that of an educated elite, an Officer. It excluded the uneducated commonality.

Thomas senior was a farmer and grain merchant. Moorthwaite is a comfortable but modestly unpretentious Edwardian family house on the edge of the village. His grandfather, however, was simply a hill farmer. The family had, through hard work, risen in the world, they had become middling sorts. Young Thomas attended Kirby Lonsdale Grammar School, where his name is on the War Memorial, and there obtained a scholarship to Cambridge. Had he survived he may have joined the Shuttleworths as a Barrister, married into the gentry or lesser nobility and have thus achieved elite status. His memorial, clearly thought thro' by proud and devastated parents, retrospectively looked forward to this.

For the rest of Barbon there is also a marble plaque in the church but I lack a decent photo of it. In the centre of the village a cross, designed by Paley, has a wonderful and uncompromising dedication! 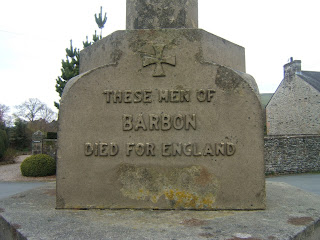 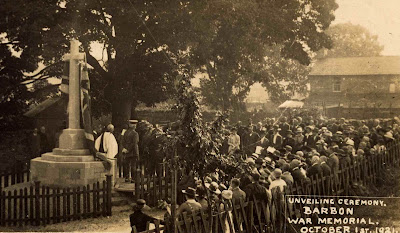