No postings for weeks!


I have just treated myself to a book - like I really need more books? However, with little effort I persuaded myself that this one was indispensable! The Stained Glass in the Churches of The Anglican Diocese of Carlisle, published in 1994 by CWAAS and written by Leslie N S Smith. I get frustrated when going around churches only to find that there is no information on windows, let alone war memorials. Some are superb examples of the glaziers art, others not quite so good.

Thus when I found myself in Temple Sowerby I was forearmed with the knowledge that the great East Window, a memorial to the men who died in the Great War, was designed GP Hutchinson and made by Powell of Whitefriars, London. It bears their signature, a small representation of a cowled monk. 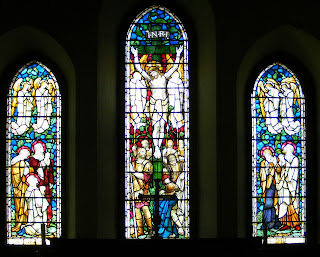 Gerald P Hutchinson (b1866) was the son of a clergyman, who was also a master at Rugby School. Gerald joined J Powell & son in 1889 on the manufacturing side. Although he described himself as 'an artist in Stained Glass' on the 1901 census and did indeed design windows he also took on a managerial role and by 1920 was a director. Most of his designs for the firm date from the earlier part of his career and into the 1930s. They are not highly rated by those who make such judgments.

This one seems reasonable. Reminds me of the William Morris window at Allithwaite of which I have no digital pic!
Posted by Louis at 22:21