It is an all to common misconception that war memorial, or memorials commemorating conflict, were only erected upon the ending of hostilities. This is far from being the case.

At Winster there is a hand written 'Scroll of Honour' which is the earliest commemorative document to have been created following the outbreak of the Great War that I have come across. It clearly bears a date of 1914. 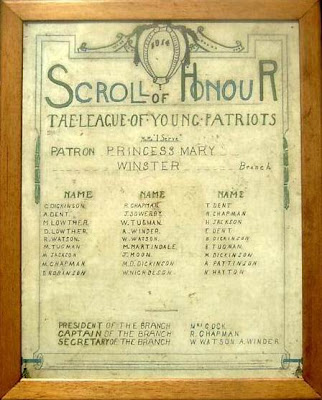 It lists those 27 individuals in the community who have signed up for The League of Young Patriots - motto, 'I Serve' . Presumably they were the youngsters of the village. I know nothing of the organisation but the sentiments that is expresses, of patriotism, honour and service, are ubiquitous on Great War memorials of all types.

A comparable object, tho' outside the county, is a memorial produced by the 'Prayer League' at St Johns church, Calder Vale in Bowland Forest on the Lancashire/Yorkshire border. The group - Established in the 2nd Year of the War of Nations, AD 1916 - was I guess prompted by similar sentiments as those expressed at Winster; support for the idea of the war and its successful conclusion and and an expression of grief perhaps or hope for the safe return of 'The Boys'.... Given the time of its creation, the year of The Somme, prayer was probably a great source of comfort to those who joined. Interestingly nearly all the names are of women or girls. 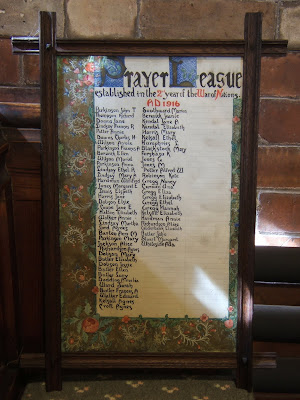 It is not professionally done is never the less beautifully illuminated. 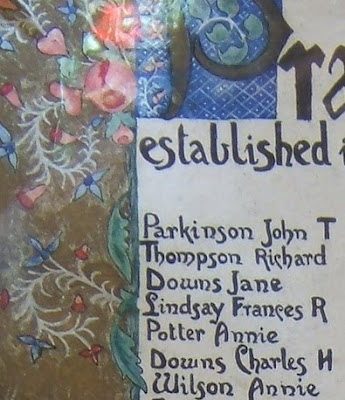