Something that really winds me up is the manner in which war memorials have historically been ignored in studies of art history, even by such people as Niklaus Pevsner in his wonderful guides to The Buildings of England. However, Mr Pevsner is not totally dismissive, he does acknowledge the memorial at Hawkshead as 'An Anglo Saxon Cross designed by WG Collingwood'. Sadly, he is wrong; it is if anything a Scandinavian wheel head cross!

But what a beautiful thing, recently cleaned and recut. 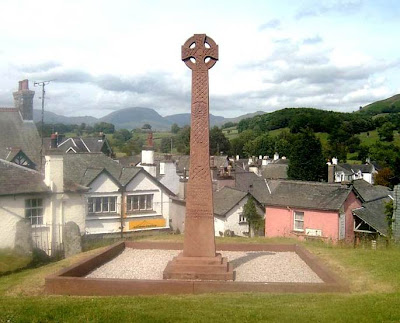 A posting really has to be done describing WG Collingwood and his memorials. I am getting closer following an email chat with Matthew Townend of York University. Matt's interests are in his own words,

Old English and Old Norse language and literature, and philology and onomastics. In particular my research focuses on England and Scandinavia in the ninth to eleventh centuries, and combines linguistic, literary, and historical approaches: I am interested in the language and literature of the Vikings in England, Old Norse praise-poetry, and late Anglo-Saxon literary culture.

Matt has recently written a book that has been published by the Cumberland and Westmorland Antiquarian and Archaeological Society that examines the manner in which much of the perceived historical and cultural identity of Cumbria, and arguably many of its post 1918 memorials, was formed out of the scholarship of William Gershon Collingwood and his friends and their passionate interest in Norse history around the region.

The Vikings and Victorian Lakeland.
The Norse Mediaevalism
of WG Collingwood
and His Contemporaries