In the years that I have been looking at war memorials throughout Cumbria I have come across some remarkable objects. Among these are a number of superbly executed illuminated Rolls. A couple that are not screwed to the wall, at Selside & Underbarrow, bear a label showing that they were made by Wileman & sons of Kendal.

The 1901 Kendal census describes a Thomas Wileman, of Mayfield, as a House Painter and Decorator, aged 39. He had two sons, George and Thomas. A 1920s directory of Kendal lists a Thos Wileman as having an Art Shop in one of the Yards in Kendal, presumably the illustrator, but - which Thomas was it?

The work is certainly impressive. The Roll created for Underbarrow school is particularly impressive - a fine piece of work in the Deco style. 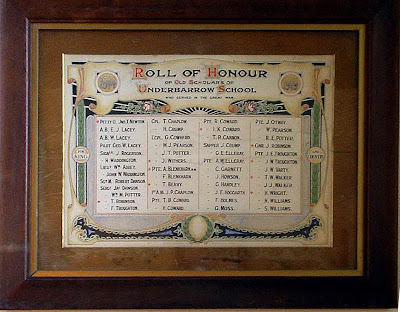