Killing is remorselessness in the history of Cumbria, Britain and indeed human history and then the paradox that, following such events, people invest such efforts into the remembrance of the consequences like a belated guilt trip. But remembrance of war is a complicated business encompassing national euphoria and vast grief. It has always been thus.

I have just finished reading a biography of Queen Elizabeth I by Allison Weir in which there is a description of the celebrations held throughout England following the defeat of The Armada. A famous image commemorating this great naval victory is the Armada Portrait of Gloriana herself commissioned in the year of the battle, so called from the images of the action seen in the background. 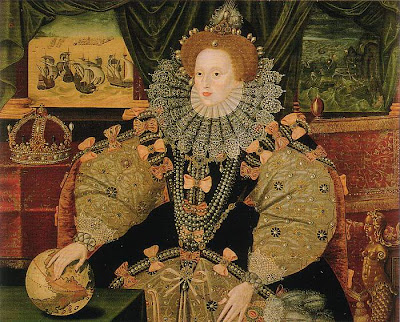 I have it in my mind that trees were also planted that year though I cannot be certain where. But tree planting became an established form of memorials commemorating war and peace, and great national events. This picture shows a tree planting somewhere around the Cartmel peninsula in the early years of the twentieth century. Judging by the fashions it is probably Queen Victoria''s Jubilee or the coronation of Edward VII or GeorgeV. There are many examples in Cumbria of trees being planted to celebrate such events and also following conflict many after 1918. 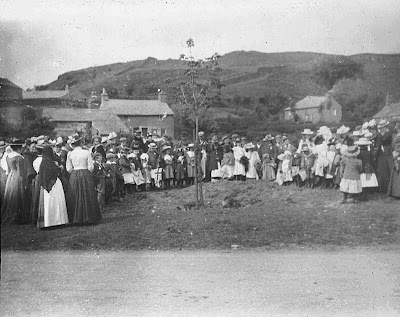 After the peace of 1919 there was a degree of confusion over what memorials were commemorating. Although they have come to be seen as memorialising the dead, to contemporaries there was also the important issue of service to King & Empire and the celebration of a Great Victory. Thus many towns and villages displayed military hardware, items that now seem incongruous. Militarism, however, was a central part of the Victorian ethos of the Muscular Christian Crusade against the forces of barbaric darkness that lay beyond Dover. Commemorations throughout the 19th century often employed martial images. The pic here shows the celebrations in Grange over Sands following either the Relief of Ladysmith in 1900 or the ending of the Boer War a couple of years later. Can't imagine such as this in the Ulverston carnival. 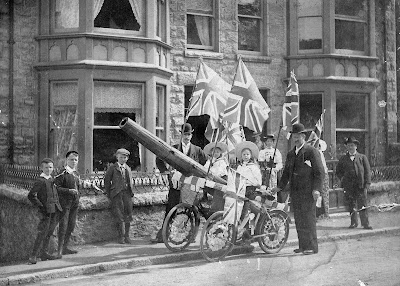 As described elsewhere on this blog peace after the Great War was only celebrated after the signing of the final Peace Treaty at Versailles on June 28, 1919. The King decreed that July 19th be designated 'Peace Day' and communities all over the country contrived celebrations. There was talk of beacons being lit throughout the country as had happened in 1588 when the Armada was sightedbut it never came to pass. Below is a pic of the peace parade in the Arnside/Silverdale area. 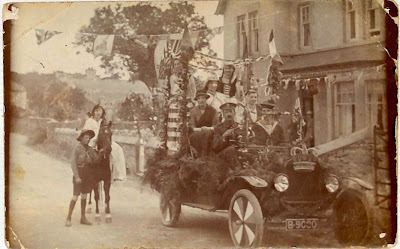 It is of course the memorials of the Great War that are central to our understanding of the processes of memorialisation. This last year saw the death of the last soldiers and sailors from this conflict. In the 1920s & '30s pretty much everyone who gathered at memorials were there because of The Somme, Passchendaele, Gallipoli and a hundred other battlefields of 1914 - 18. The men had experienced it, wore their medals and marched proudly like these guys in Church Walk, Ulverston. 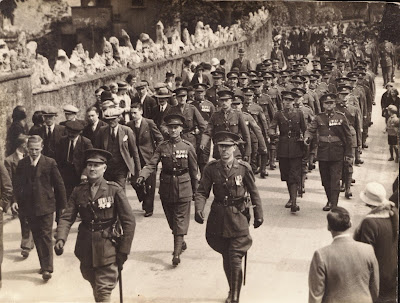 The rituals of Remembrance became established and persist to this day, though the sentiments have subtly changed and we no longer have soldiers with rifles reversed. There were more people attending then. Unlike in Blair's wars the entire nation was touched by recent events and more respectful of authority. 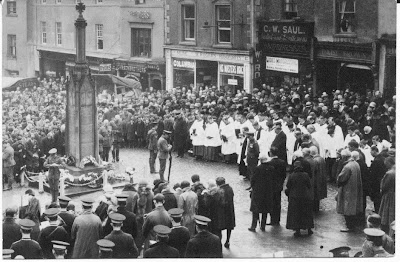 The building immediately behind the cross was demolished to make way for 'Woolies'. In the mid 19th century an upstairs room was the venue for an annual reunion of Furness men who had served with Wellington and Nelson.