Paley and Austin, architects of Lancaster

I was talking to a guy today who for some years now has been assiduously researching the work of Edmund Sharpe, one of the original partners in the firm of architects commonly referred to as Paley & Austin of Lancaster. It reminded me that I really should put up a posting about them. They were quite prolific for a hundred years but the sheer number and variety of memorials that they designed after the Great War made it difficult to explain what they were up to in a meaningful way.
But lets have a go.

They were for many in the North West the architects of first choice. They had designed innumerable churches during the great Victorian rebuild/restoration and were often utilised by such as the Furness Railway. The chapel at Sedbergh School is theirs and they also submitted two designs for Liverpool's Anglican Cathedral. The firm was a major player, even Pevsner has a good word for them!

Thus when the need arose for memorials after 1915 (for many memorials were being discussed from 1915/16 onwards) many parishes & townships approached an outfit that that they had probably worked with before, whose work they liked and whom they trusted to produce an elegant and innovative design but with a good helping of the traditional. A comfortable mix for Edwardian's raised in the ideals of chivalry & muscular Christianity.

P & A had built their reputation around solid neo-Gothic, often working in the Early English Style. So many memorials are in this tradition.

A fine example is in the churchyard at St Mary's, Ambleside. 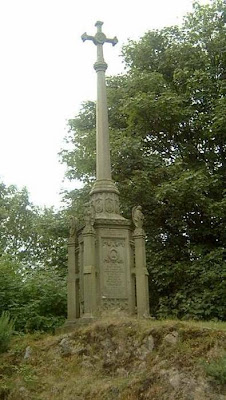 The iconography is clearly English Gothic and the processional type cross head is typically P @ A. I really like the individual angel figures at the four corners, each different. It is high church, of antique sentiment and very finely proportioned. A superb design.

At Kirby Lonsdale the requirements of the memorial were rather different, it looks like the product of a committee decision!

Here P & A are trying to bring together a load of really rather incompatible elements of design. A 'Celtic' cross stands on a rather lumpish neo-classical base that itself bears Romanesque elements. The reason for this last bit can be found in the church. The capitals of the pillars at the west end of the nave are themselves superb examples of Romanesque decoration and I guess some members of the committee wanted these, the church's pride and joy, to be reflected in the memorial. 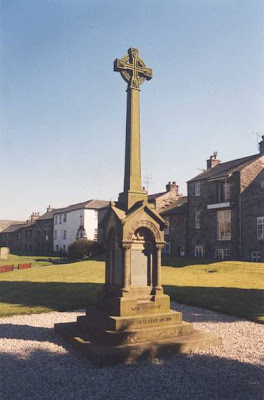 Another common element in P & A memorials, utilised here, are the three steps of the base, the 'Calvary' steps. This was an element employed by Collingwood on his memorial to John Ruskin at Coniston. Though I have discussed its origins with an academic vicar I can't figure out what they symbolise.

Apart from these rather ornate designs P & A could just as successfully produce something simple but functional. 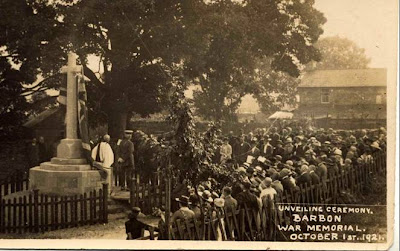 The old postcard shows the unveiling of the memorial at Barbon. The cross is quite plain, not entirely dissimilar to Blomfield's Cross of Sacrifice, utilised by the Imperial War Graves Commission in their cemeteries. This design was employed again at Cross a Moor where it commemorates the men of Pennington who died.

Such re-employment of design was not unique. 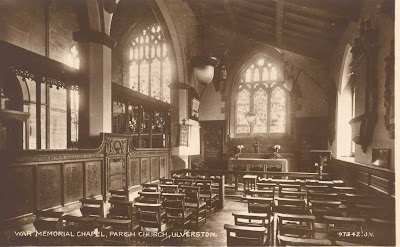 The £1200 design of the Bradyll War Memorial Chapel at Ulverston is pretty much identical to the War Memorial Chapel at Giggleswick, Yorkshire. I imagine P & A must have been paid twice. Certainly in the post war years the firm was fully employed in what must have been the lucrative pursuit of creating memorials. They are everywhere in the district.
Posted by Louis at 22:13