My February 2008 posting about a memorial at Urswick has prompted a reply. It appears that Sgt Thomas Gardner was indeed a veteran of the 1st Life Guards at Waterloo. Born in Ulverston in 1789 he served in the army from 1808 until 1818 during which time he must have partaken in the action at Salamanca, in the Iberian Peninsula, and in the camapaigns of 'The Hundred Days' leading up to Waterloo.

The pic shows a Lifeguard at the time of the Battle. 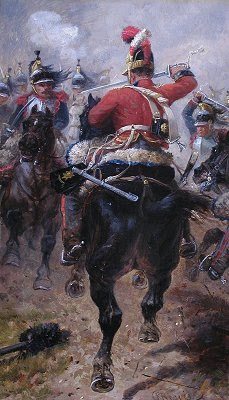