I was recently talking to a Quaker lady at Swarthmoor Hall who, being aware of my obsession, asked me if I knew about an unusual inscription on a craggy outcrop of rock on Green Moor, Woodland, nr Broughton in Furness. I didn't, but what a remarkable discovery. 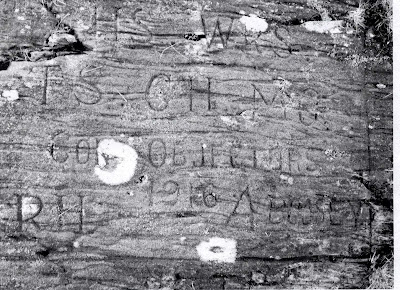 What is most interesting is the short inscription which accompanies them,
CON OBJECTORS 1916

Who were these people, clearly conscientious objectors, and what were they doing in Woodland in 1916? On the 1901 census there is only one Boosey, Leslie A, who might fit the bill for the name. He is a 13 year old, born at Bromley in Kent, and a pupil at Hildersham House School, St Peter Intra, on the Isle of Thanet. His father, Arthur, was a publisher.

The rock is some hundred yards or so above the lane at OS Ref 25758945. A better picture would be much appreciated. 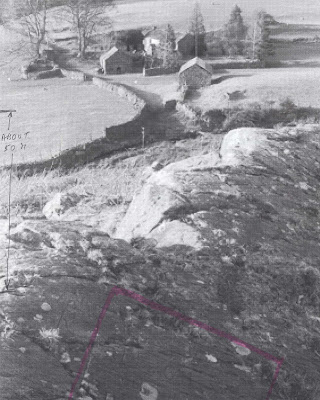 Some of these guys were probably Quakers whose ethos is one of pacifism. During the Great War many joined The Friends Ambulance, allowing them to 'do their bit' for King & Country without compromising their faith. Others refused to have any part in the conflict.

Which brings me nicely to Swarthmoor Hall, the birthplace of the Quakers. As I write this, at the end of a beautiful sunny day, the meadow at the back of the house is ablaze with tens of thousands of crocus. An amazing sight.

They are ancient, as is the hoary old pear tree at the bottom of the field, probably a remnant of what would have once been a huge orchard providing fruit for Margaret Fell and her family in the 1650s. Visitors are welcome to the gardens at no cost.
Posted by Louis at 00:36

Hi I would like some help from someone in Cumbria re a memorial my Great Grandfather is named on in Workington. If you cna help me please email me on a.mnelson@xtra.co.nz thank you so much from New Zealand