Old Etonian - a memorial of status

It is commonly stated that memorials of the Great War are entirely egalitarian, all ranks from whatever background were given equal status in death. However, this is not entirely true.

Indeed it is evident that the majority of memorials and rolls of honour inside churches do indeed make a distinction between rank and status.

The Anglican church in Edwardian England was the embodiment of the values of the establishment and this was obsessed with status and the maintenance of the established order. Such social and class distinction was largely accepted on all sides. My own grandmother, a weaver from Burnley, would routinely observe that many things were 'not her place'; she was entirely accepting of her working class status and the unwritten boundaries that this imposed upon any aspirations she may have had. Such sentiments were common in my youth.

I was recently watching the 1939 film The Four Feathers directed by Zoltan Korda and set around Kitchener's expedition to Khartoum to avenge the death of Chinese Gordon. In the film Harry Faversham surrenders his commission. His fiancee, Ethne Burroughs - the daughter of a Crimea veteran, reminds him that by being born into a high status military family he has few free life choices but many obligations, not least to maintain an unwritten code including the requirement to serve King and Empire without question.

Throughout Cumbria there are numerous memorials to men like Harry Faversham, often church windows, that commemorate young officers who died while serving with the Territorials, an occupation that was a virtual obligation for men of wealth and status. A spectacular example is the Lees window at Preston Patrick made by Shrigley & Hunt of Lancaster. 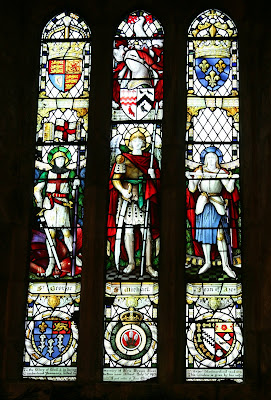 To the Glory of God and in Loving Memory of Eric Brown Lees, Major,
Westmoreland and Cumberland Yeomanry,
killed in action near Albert, July 31 1918.

This window is given by his wife.

A good soldier of Jesus Christ.

Windows such as these were carefully crafted at great expense and require to be read; they are an iconographic biography of the man.

So here we have stock Shrigley & Hunt figures of St George, St Michael and of Joan of Arc; iconic representations of England and France flanking the embodiment of the Christian warrior. Above each of the national saints are the Royal Armorials of each Kingdom. Above the St Michael figure is the family crest of the Lees family.

The bottom of the window (l to r) display the armorials of Eton College, where Lees was a pupil, The Westmorland & Cumberland Yeomanry and finally Exeter College, Oxford of which he was an alumni.

Memorials such as these were designed to be exclusive. Only the educated would entirely understand them.

Although the use of heraldic rules and devices, and classical languages gave full access to the meaning of the [windows] only to a select few who knew Latin and could interpret the codes of heraldry, other people would have recognised at least their partial exclusion and, in a general way, the elite status of such monuments.

The Lees' were an old Lancashire family of landowners and by the mid 1800s were significant colliery proprietors around Oldham. It would be these enterprises that gave them their wealth and status. Eric, himself a JP, was the son of Lt Colonel Edward Brown Lees, JP, DL and his wife Dorothy. Though maintaining their connections in south Lancashire the family home from the later nineteenth century was Thurland Castle near Carnforth. 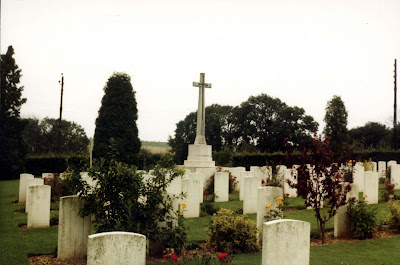 Hi. I would just like to thank you for doing such a comprehensive post on this window as it has been very useful towards an English project I am doing on Major Lees. Thanks!

Ellie! Thanks - maybe you can add to the posting. It is one of the most beautiful windows in the county - superb quality. It is Preston Pat isn't it?? Or have I had a senior moment? Not listed in Smith's Stained Glass of Carlisle Diocese!

Hi Ellie, Louis, Have just seen this from some years ago, so probably too late. But in case you were looking for it the window is I think actually in St John the Baptist Tunstall - close to where he lived. I am a distant relative of his so am happy to hear you are/have writen a project on him! If you need any more information I will try and help. Kind regards CH.