For some reason Millom and district has a number of  memorials to those who died in the Boer War. Why I wonder? It is a small town but it did have a huge iron mining & smelting industry in the 19th century and as a consequence of this and its relative isolation, a strong sense of community. Some 37 men from the district fought in South Africa & 9 died. Three of these have individual memorials at Whitbeck, Haverigg & Millom Holy Trinity.

However, the most impressive is that which stands outside the east end of St George's church in the town upon which are listed all nine fatalities. 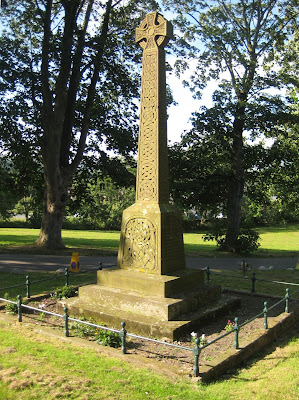 The cross was unveiled on a sunny summer day in 1904. In so many ways these Boer War memorials set a precedent for 1918; the form, the elevation of the common man & the 'elevated rhetoric', a language of service & death, was soon to be ubiquitous.

The long talked of memorial erected in St. George’s Churchyard from a design of Mr. W. (sic) Collingwood of Coniston, and supplied by Mr. Miles, sculptor, Ulverston, at an estimated cost of £300, was unveiled this afternoon at 2 o’clock by Colonel Bain M.P. for this division.....

Well, ladies and gentlemen, we who live in this county of Cumberland, and especially we who reside in this immediate neighbourhood, are proud – naturally proud – to do honour to those brave me who did their duty, and there is something more than that. We appreciate, we admire, their brave deeds, their patriotic devotion, but what they did, giving their lives, will live after them. It will be a memory, it will be an example and an incentive to those who come after them, when the occasion arise, to do their duty as these brave men did..

An interested spectator at the unveiling ceremony to-day was Mr. Richard Hodge, aged 74 years, and late seaman on the “Agamemnon.” He had the distinction of wearing four medals, two for service in the Crimea, including Sebastopol, one for Abyssinia, and one for good conduct and long service, covering over 21 years. He is the father-in-law of Sergt.-Inst. Jones, of the local Volunteer Corps, and for a man of his years is remarkably well preserved and vigorous.

For the rest of the memorials, two are of men who fought in the same unit, at the same action.


At Haverigg church a large marble plaque commemorates John Park of Hemplands who was wounded at Faber Spruit on May 30th 1900 and died the following day. 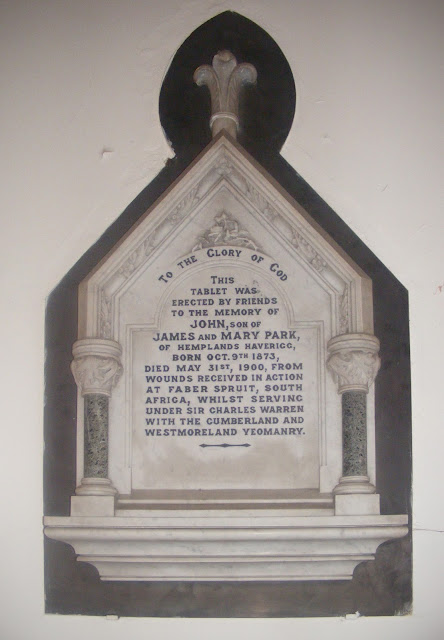 At Whitbeck, below, some miles to the north of Millom, a very similar plaque describes John Crayston of Monk Foss who was killed in the same action and fighting with the same unit, The Westmorland & Cumberland Yeomanry. Faber Spruit was a bit of a sideshow and the casualties largely a consequence of the tactical incompetence of the column's CO, General Sir Charles Warren.

As the main British offensive neared the Transvaal capital of Pretoria, other forces, 'colonial' and Imperial Yeomanry, pursued Boer forces in the northern and western Cape Colony. One of these columns halted on the evening of May 30 to wait for supplies at Faber's Put. The choice was not a good one, as a number of ridges within rifle range overlooked the farm buildings. 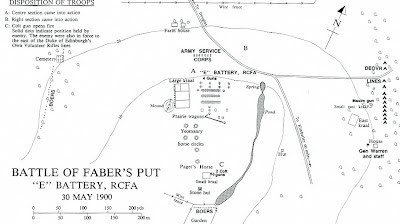 That evening, 600 Boers surrounded the position and a party crept past the British outposts. At dawn the Boers poured fire into the mounted infantry lines, killing men and scattering scores of horses. In the Canadian lines, next to the British, the gun detachments ran to their guns while the drivers harnessed the horses and led them to safety. It was still too dark to aim the guns, so the gunners lay prone beside them.

As the sun rose, a British unit recruited in South Africa counter-attacked, while the Yeomanry engaged the Boers at close range. Two Canadian nine-member gun teams manhandled two guns across a fire-swept field and brought them into action, losing one man killed and seven wounded in the process. The combination of the counter-attack and the artillery fire was too much for the Boers, who abandoned the battle. Although Warren claimed victory, down-playing the 27 killed, 41 wounded and the loss of a large number of horses, the engagement was, in fact, a defeat.

The third memorial is in Holy Trinity, Millom's ancient parish church that stands next to Millom Castle, the one-time seat of the Huddlestones. I think the plaque has been re-located here from Kirksanton, a small community near to Whitbeck that lost its church some years ago. 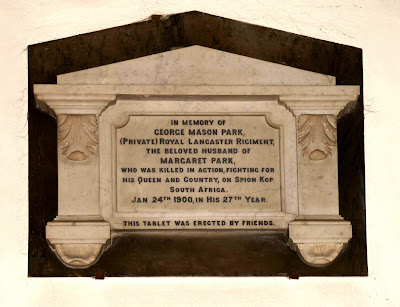 The plaque commemorates George Mason Park of the Royal Lancaster Regiment who was killed on Spion Kop. See here for a comprehensive description of the battle and its consequences. It was a bloody affair that left 1500 casualties including some 243 dead. In terms of the Great War an insignificant number but devastating in 1900. 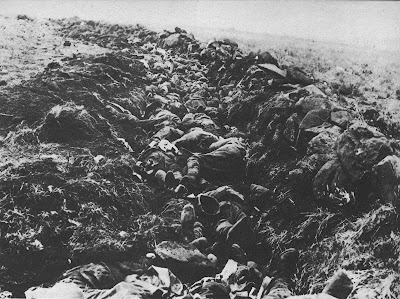 The dead were buried in the trenches where they had fallen in such numbers. 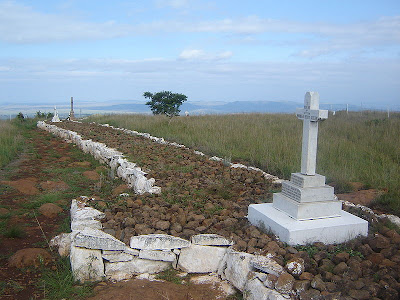 The action at Spion Kop was largely fought by men of the north & its memory is kept alive at a number of football grounds that have stands named after it, most famously, perhaps, at Liverpool FC's ground.