Grace recently asked for a pic of the memorial inside St Peter's parish church, Ireleth ... Here it is ... 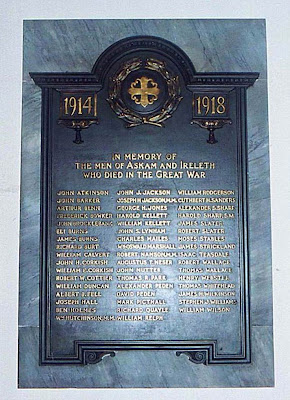 Askam & Ireleth war memorial committee's initial proposals, were wildly over ambitious at a time of financial restraint (!sounds familiar!). Eventually the trustees, probably through the offices of the Reverend Ridley, approached Mowbray and Company of London, an established firm of church furnishers, requesting a design for a memorial plaque. This was produced and displayed in the window of Askam co-operative society’s shop in Duke Street through the course of September 1920. On October 4, a special parish vestry meeting was called to discuss the sanctioning ‘or otherwise’ of a faculty for the placing of the plaque on the south wall of the nave of St Peter’s parish church. In chairing the meeting the vicar noted that both the design and the suggested location of the memorial had ‘the sanction and support’ of the relatives of the named dead. The proposal for the faculty was unanimously accepted.

The memorial of cast bronze mounted on a pale cream marble slab was installed in the church by John Baxter Riley of Sea-View, Ireleth; undertaker, sexton, monumental mason, joiner and parish clerk. The plaque was formally unveiled on Sunday, March 19, 1921 by Captain J. M. Challinor, M.C., of  ‘Nether Close’, Ireleth. It cost something in excess of £150 of which £101.14s had been raised by public subscription up to that time.  Challinor was the son in law of Henry Mellon, chair of the war memorial committee. 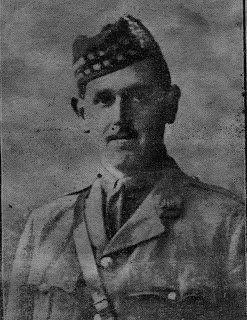 Captain Johnson McMillan (Jack) Challinor was the son of Sam Challinor, the village doctor in the late 1800s. He had won the Military Cross serving with the King's Own Scottish Borderers at Hill 60 in 1915.


He was awarded the Military Cross for his actions during the Battle of St Julien on the 5th May, when the Battalion, part of a sorely depleted 13th Infantry Brigade, was ordered to retake a section of Hill 60 that had been retaken by the Germans. Two companies, 'C' and 'D' led the assault, but heavy fire forced them to retire to the trenches from which their attacks had been launched. However 2 platoons under the command of Lieutenant Challinor managed to gain a somewhat tenuous position, and stuck it out until only the officer and 3 men were left. This party only withdrew when the flanking forces were ordered to retire. He was promoted to Captain in May. 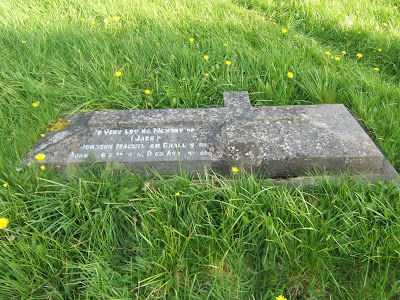 Thanks so much for the photo of the plaque. I really appreciate it.(I am only just now seeing it because I only went back to look at the page where I left my previous comment/request, and today being Veterans' Day, I came back again).