The first post I put on this blog a few years ago (!!) described the memorial at Winster, probably my favourite in south Cumbria. In spring the beautiful red sandstone cross stands in a carpet of wild daffodils. Stunning! Orginally it was much taller - how imposing it must have been - though it still is. 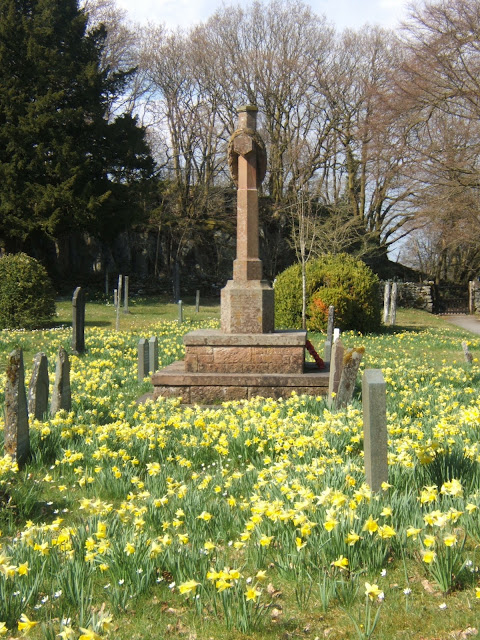 Unusually it is signed, by Mary Kynaston Watts-Jones (nee Potter) - her grave stands immediately behind her creation. 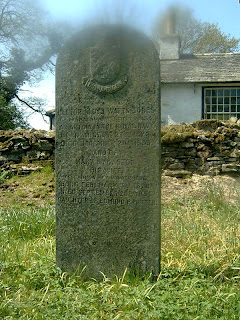 Known in the family as 'Dot' due to her diminutive size she died in 1951 aged 73 at Bannon Hey, Windermere. In 1903 she married her first cousin, Hector Lloyd Watts-Jones, a Captain in the Royal Navy (died Jan 1933 aged 61). She is further described on her gravestone as the daughter of Edmund Potter.

One day when I was in the churchyard a local lady informed me that she was a relation of Beatrix Potter and I questioned what the relationship was, but she did not know. However, a family tree that has appeared online clarifies the position. Mary K was the daughter of Edmund Potter who was first cousin to Rupert Potter, Beatrix's father. So Mary K & B are second cousins. The Watts-Jones, Kynastons & Potters were all engaged in the Lancashire cotton industry in some manner and which made the family fortunes.

Mary was a sculptress & miniaturist, though I find no reference to her online or anywhere else easily accessible. However, an email correspondent sent me the following pic out of the Illustrated London News of July 19 1919.

I am unaware of whether this memorial was actually erected somewhere or whether Mary K W-J has any other memorials in the country.

I imagine she was called upon to design the Winster cross because she was living within the parish during the Great War, at Bowfell and she was a woman of some status -- well connected! Her grandfather & her husband's grandfather were both MPs and industrialists so she will have been well acquainted with the Holt & Higgin-Birkett families, both of whose son's names appear on the memorial and who will in turn have had some say within the community as men of property & influence. But that is not to detract from her evident skills as a designer and artist.
Posted by Louis at 00:43

She was my great grandmother :)

Hi! Can you give me more info about her?