We in Britain celebrate victories over our enemies, the Axis & Japan, in 1918 & 1945. But we lament the loss of influence in the world, moving from global superpower to American poodle, by way of Suez & Butcher Blair. And while watching a stiff upper lipped Sir John Mills winning the battle we give little thought, beyond sometimes rather tasteless jokes, to the defeated peoples. The systems they fought for, certainly between 1939-45, were truly evil Empires. Russian POWs, Poles, Gypsies, Gays, Jews, Far East POWs, Chinese, the natives of many Asian countries and myriad others will affirm that. So it was OK to defeat them.

But I am reminded sometimes of how we, the Allies, behaved like Avenging Angels. The true purpose behind the bombing of the ancient towns of Germany or Japan has yet to be honestly addressed. 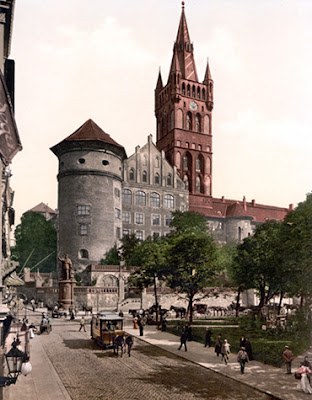 Mediaeval Konigsberg was one such, bombed in 1944. The historic districts of Altstadt, Löbenicht and Kneiphof was obliterated, with the dome, castle, university (old and new), the old quarter and all the churches blown away. So much of Europe's achievement was destroyed for little or no gain.
What a price to demand of our foes.

In those acts we, the victors, stand accused.

Germany lost so much. Only through Google Earth did I come to fully realise that East Prussia was entirely stripped from the country. Indeed after 1945 Konigsberg became Kaliningrad, a wholly Russian Oblast, fully endorsed at Potsdam by Churchill, Roosevelt & Stalin. It is now as Russian as Moscow or Volga/Stalin-grad. It was ethnically cleansed. The entire surviving German population of more than 200,000 was forcibly expelled by the Russians in 1945/6 and the great city and its landscape was resettled by Russians, Byelorussians & Ukrainians. Today only some 0.6% of the people are of German  ethnicity

And its German heritage, the churches, great houses and villages, in the landscape for 700 years, crumble to dust. Such is the stuff of history. 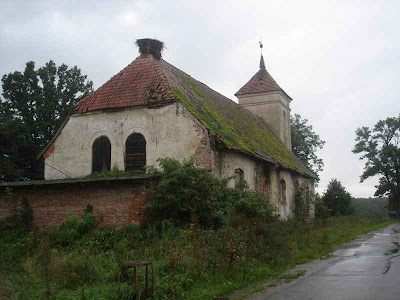 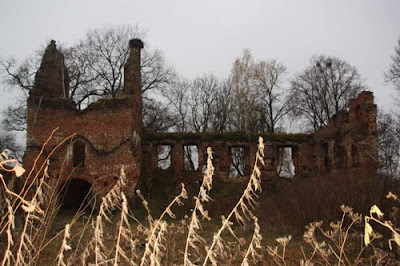 The former home of a Prussian landowner has no name.

There must be a deep wound in the German soul - to have lost so much.

But as I browse the thousands of pics on Google Earth I am suddenly presented with the grief of and for the common soldier - the tools of politician's weird Messianic visions.

The German army fought like lions to hold Konigsberg, to allow the evacuation of its women & children. In so doing it suffered horrendous casualties. 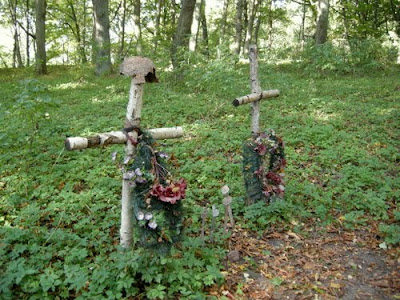 In a wood some miles south of Kaliningrad city, close to a ruined castle, there are these two crosses, with very German wreaths. On one is a rusting German helmet. Both crosses are new, made from a length of silver birch. There appear to be name tags. Who are these guys? Is it one of the mass graveyards ploughed over on Stalin's orders after 1945 or just a couple of guys who died for their mates & their country? Dunno.

But they are remembered. By grieving family? Or by ethnic Germans, some of the 0.6% honouring their country's dead? Or treasure seeking Russians?

I found this a deeply moving image.
Posted by Louis at 00:34