I was recently trawling through the archives, looking at old newspapers. After 1918 there are almost daily entries about war memorials; meetings, fund raising, proposals and unveilings. One very short article I came across was so very poignant.

Captain Birnie was Edward D'Arcy Birnie son of Isabella and Robert Birnie of Sycamore Terrace, High Harrington, Cumberland. He died of wounds aged 26 on March 22, 1918 while serving with the 8th Bn Border Regiment. Before being commissioned in November 1915 he served as sergeant, 845, with the 5th Borders. He was in France from October 26 1914. 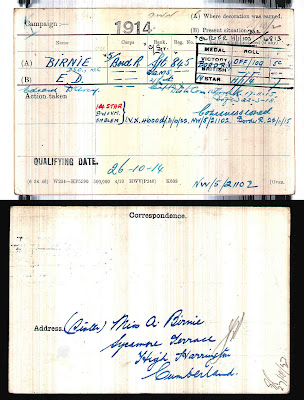 His father, Robert, a Scot, was a Head Gamekeeper who in 1901 was living at Winscales, the community largely obliterated by the Nuclear Industry.

On December 8 1916 the London Gazette carried a notice of the award of the Military Cross to Temp- 2nd Lt E D'A Birnie, Borders ..

For conspicuous gallantry in action. He led a successful bombing attack against an enemy strong point, himself killing at least 8 of the enemy.

Again, on July 23 1918, the London Gazette carried the report of the young acting-Captain's award of the Distinguished Service Order ...

For conspicuous gallantry and devotion to duty. When hard pressed by the enemy he led several counter attacks against their bombing parties, and for hours kept large forces of the enemy at bay. At one time he took up a position on the parapet,and (being a marksman) accounted for many of them with a rifle. Finally, when his position became untenable, he successfully withdrew his men. He displayed exceptional skill and courage in face of great odds.

So upon his death he got a memorial gate light from his young fiance, at Rampside, an isolated church above The Bay on the coast road outside Barrow in Furness. 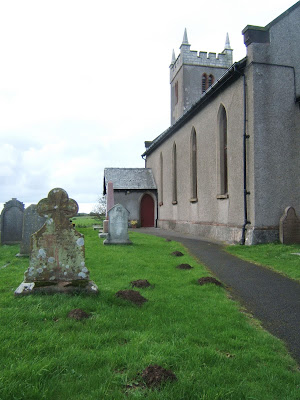 Who was Miss Pollitt? There was a Pollitt family living at 85 Rampside in 1901. 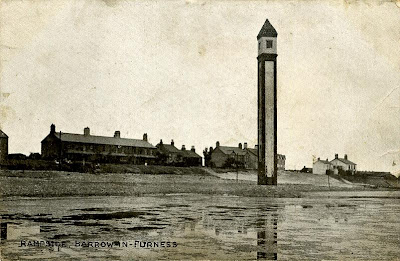 Thomas, the head of the family, was a Hatter, Hosier and Gents outfitter. Although there is no young girl with a name starting 'M' living with the family at the time there is a Margaret Henrietta, born Barrow in 1894, staying with her Grandparents in Ulverston. Perhaps this is her.

Sadly there is no sign now of a gate light in the churchyard at Rampside today. And no doubt Miss Pollitt is herself long dead - as is the memory of her love of a young officer. But this post remembers it.