The origin of the lyrics of this hymn is a poem written in 1908 by Cecil Spring-Rice, a diplomat in the British Embassy in Stockholm. 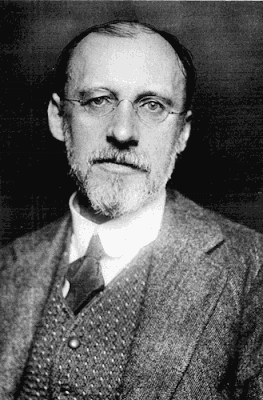 Called Urbs Dei or The Two Fatherlands, the poem described the Muscular Christianity and deep patriotism that is so much a part of the ethos and ritual of post 1919 Remembrance. The second verse is rarely sung.

I heard my country calling, away across the sea,
Across the waste of waters she calls and calls to me.
Her sword is girded at her side, her helmet on her head,
And round her feet are lying the dying and the dead.
I hear the noise of battle, the thunder of her guns,
I haste to thee my mother, a son among thy sons.

And there's another country, I've heard of long ago,
Most dear to them that love her, most great to them that know;
We may not count her armies, we may not see her King;
Her fortress is a faithful heart, her pride is suffering;
And soul by soul and silently her shining bounds increase,
And her ways are ways of gentleness, and all her paths are peace

In 1912, Spring-Rice was posted as Ambassador to the USA. After the Americans entered the war in 1917, he was recalled to Britain but shortly before his departure in January 1918 he re-wrote and renamed his poem, significantly altering the first verse to concentrate on the huge losses suffered by British soldiers during the intervening years. Also, presumably, the second verse.

In 1921 the English composer Gustav Holst adapted the music from a section of Jupiter from his Planets Suite to create a setting for the poem. 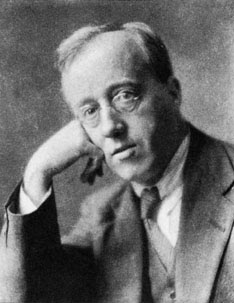 The music was extended slightly to fit the final two lines of the first verse; the resulting melody or hymn tune is usually referred to as Thaxted, named after the the quintessential English village in Essex where Holst lived for many years.

The hymn was first performed in 1925 and very soon became an English anthem.

Cecil Spring Rice had a younger brother, Gerald, who was killed serving with the 11th Lonsdale Bn, Border Regiment, on May 26th 1916. He is buried at Authuille on The Somme but commemorated by a couple of memorials in The Lakes; at Watermillock on the western shore of Ullswater and on the lower bridge at Aira Force. The upper bridge is a memorial to Cecil. 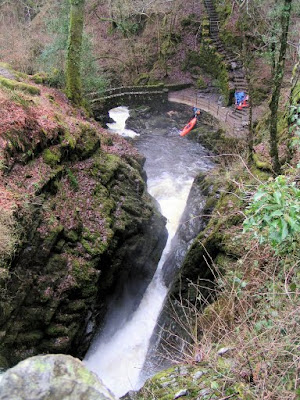 Gerald's Watermillock memorial is a beautifully executed copper plaque, on oak, on the north wall of the nave; probably Keswick School. At the time of his death he was living with his wife at Mell Fell House, a delightful residence just yards away from the church. 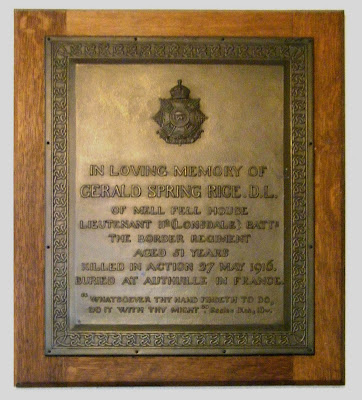 Gerald Spring Rice and his brothers Cecil and Bernard homesteaded in Saskatchewan. Cecil accidentally shot a neighbour through the door when his gun went off while cleaning it. After this incident he left Canada and returned to England. His brothers contributed a lot of firsts in the Regina/Pense area of Saskatchewan. Gerald's widow rented out the land after his death, and my family was lucky enough to rent the land and later buy it.