(If Bill Brabban of Durham reads this again can he check out the comments at the bottom please!?)

My mate Rod who has a vast collection of stuff on the history of Silverdale sent me an email this week about a local pamphlet he holds,

"Silverdale - The Loveliest Spot on Morecambe Bay" published by the Silverdale Advancement Association. The copy has no date but a subsequent edition was published in 1936.

Both describe the purchase in 1921 of Bleasdale House by The Bradford Dyers Association as a convalescent home and as a memorial to 707 members of the association who had died in the war and also as a memorial to 37 killed when Low Moor Munitions Co Ltd suffered a disastrous explosion in 1916. 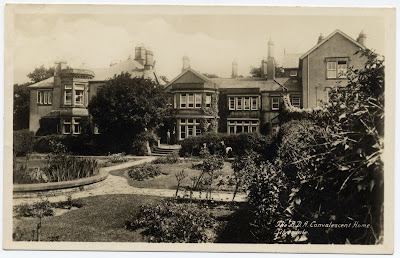 The house was built for the Sharp family but during the war had been used as an auxiliary hospital. 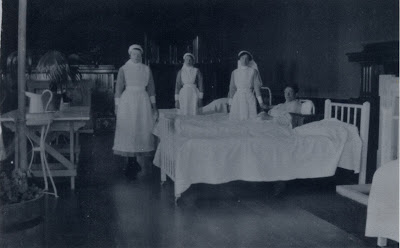 Happily he survived and went on to marry Nurse Hilda Florence Dunn, of Haslingden nr Sandbach, at St Johns church in Silvedale in July 1917.
Posted by Louis at 00:21

Nurse Hilda Florence Dunn is, incidentally, the nurse nearest to Cpl William Brabban in the photograph (with her hand on his arm). I know. They were my grandparents. I have the original photo at home plus others depicting convalescent soldiers at Bleasdale House in 1916/17.

Bill I would like to thank you for your posting on Bleasdale Ho. I have been trying to contact you regarding Bleasdale but I have obviously sent messages to wrong email address. I have lots of info on Bleasdale Ho and the VAD Unit hospital based there 1915-1919 etc.

I live in Silverdale and I am trying to record the villagehistory. I would be grateful if you would contact me on rodnann(at)aol.com.