Got round to visiting Sir John Barrow junior school in Ulverston where a memorial, walled up thirty years ago, re-emerged during recent building works.
It was both disappointing and fascinating! 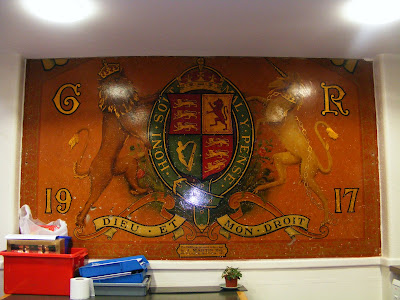 The memorial, if such it is, was painted directly onto the wall and clearly shows the Arms of King George V and the date 1917. Unfortunately there is more disappearing into the ceiling that has not emerged during recent renovations. If there is a list of names or a clear indication that it is a memorial then it must be hidden there.

A small panel at the bottom tells the viewer that it was presented by J Martin Esq on March 9th 1917.

As can be seen on the lower pic it is quite badly damaged by people using it as a notice board of some sort. It is badly pitted with holes from, presumably, drawing pins and such.
Posted by Louis at 00:33

if sir John Barrow school is what was Lightburn school the top of the painting says "Fear God and honour the King" or similar. Although I stared at it for four years twice a day, during assembly and for school dinners I never really worked out if that was the right way round.

Steve. Brilliant - thanks! I think there was an identical mural at Dale Street - but if so then it remains covered up!
I'm afraid I don't know which was Lightburn, but probably John Barrow.

Lightburn was at the top of Hill Fall / Tyson square. There wasn't one at Dale St. infants that I recall (I was there late 50s)unless it was on the back wall of the hall but there may have been one at the girls junior school next door.
Just got to the bottom of the blog. It was the panel to the left of the door (headmasters office)
mail me on nextavailable1@gmail.com if I can help with other info