'Nother Last of The Summer Wine days today - up the Eden valley, one of the most beautiful places in England. On the way we drove past Grayrigg, a small village between Kendal & Tebay that was in the news a couple of years ago following a dreadful train crash on the west coast mainline which passes through the nearby Lune gorge.

In the centre of the village is the church of St John the Evangelist, a former chapelry of Kendal.
In front of the church, beside the road, is a small memorial made of Orton limestone. 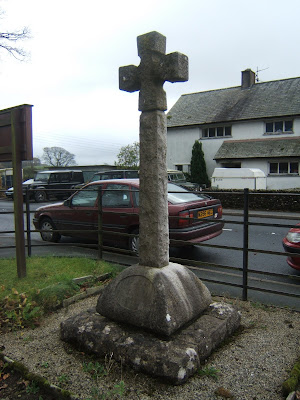 It bears the names of the dead from all the smaller communities that make up the parish through the conflicts of the 20th century. It bears an odd sort of inscription of c1919;

It is unusual in that it has the name of Royal Marine Benet Carr Blakeway who died on February 9th 1956 during the Cyprus emergency. 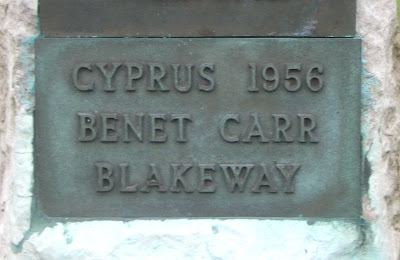 This contemporary newsreel gives a flavour of why the young guy died.

Apart from having his name added to the village war memorial Marine Blakeway's memory was further maintained by his parents donation of a beautifully bound service book to the church. 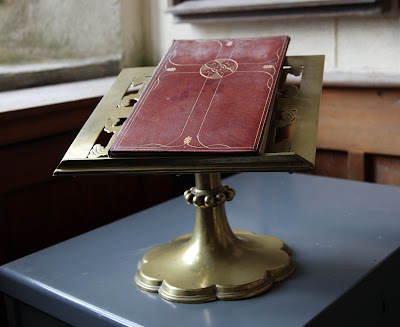 The flyleaf bears an illuminated dedication. 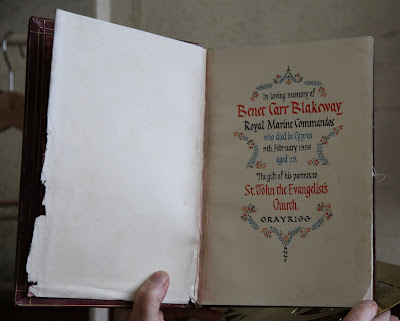 These are the sort of small memorials that are often lost. This service book lies largely forgotten and apparently unused at the back of the church. It could certainly do with a bit of TLC/
Posted by Louis at 19:49

I was serving with the army in Cyprus
doing my national service in 1956 to 1958 with a short spell of duty in the persian gulf during the Suez crisis,it was a stressful time as I was only 19 and not knowing who was friendly or against us.I feel that the Cyprus conflict has not been recognised as a serious conflict where many British soldiers where killed or injured Ron Syddall

Hi Ron! Thanks for the comment. I agree - this memorial book is quite sad - damp and forgotten at the back of the church - much like your service. Hope I have done a little to shine some light on it.

I was there too,1956-58, lost 10 of me mates and a cousin. Whiltshire Reg Aghurda & Kyrenia Castle. Dirty war. Also standing by for Suez on a Distroyer HMS Carysfort 25.
Still have all those bad memories at 74 years old.