Found myself having a grey day this week but the sun was out so I took off and had a trip out to Keswick. To get there I had to drive past Grasmere, a delightful village lying beneath the Lion & the Lamb at the foot of Dunmail Raise. While there I made a detour to take some pics of Broadgate Meadow. 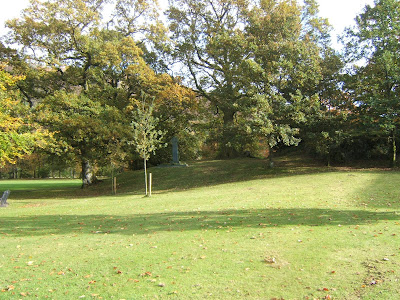 Hidden on the low outcrop in the trees is a decorated cross of local green slate, the village war memorial of 1919.

It was designed by William Gershon Collingwood, antiquarian, artist & secretary to John Ruskin. At some point I'll get round to putting a post up about him. On the reverse is the name of the memorial mason, W Bromley of Keswick. Did he carve it or merely erect it? Probably made it, although a number of Collingwood's memorials were carved by his daughter, Barbara.

The cross is one of the more fascinating in the county. The secretary of the memorial committee was fellow antiquarian Rev Hardwicke Rawnsley who had retired to Allan Bank, Grasmere in 1917 after serving as Vicar of Crosthwaite, Keswick for 34 years. Rawnsley was a close friend of Collingwood and it was probably as a consequence of this that WG was invited to create the memorial. In response he created a remarkable object, it feels like a pastiche of a 7th century Anglian cross. Indeed it is probably inspired by the local belief that St Oswald preached here in the 7th century. 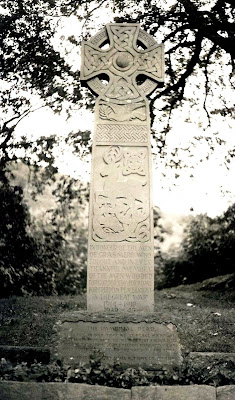 Below the wheel head is a dove and below that a stag trampling a dragon.

Below this again is a poem,

THE IMMORTAL DEAD
These died in war that we in peace might live
They gave their best so we our best should give
Not for themselves, for freedom home & right
They died and bid us forward to the fight

See you to it that they shall not have died in vain.

Academics talk about 'The Language of Courage' or the 'Elevated Rhetoric' that is so closely associated with the Great War. Few memorials illustrate this better than Grasmere. Both inscriptions were probably dreamed up by Rawnsley - (I presume? Maybe not!). He was a vigorous Victorian patriot and wrote a considerable amount of rather histrionic poetry. Oddly, the poem, such an angry response to the war, reappears at Dent so maybe it is not Rawnsley.

There are no names on the memorial, the village dead are listed on a plaque in the nearby c12th century church of St Oswald where William Wordsworth and his family are buried.

Across Broadgate meadow there is a large oak tree. 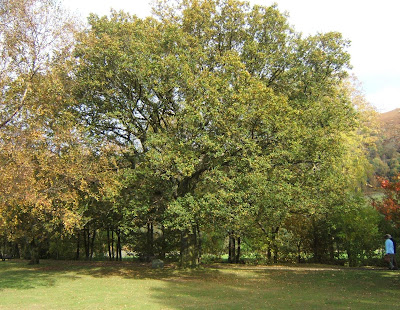 Beside it is a small slate boulder explaining that the oak was planted by Canon Rawnsley on Peace Day, July 19 1919 when all the villagers of Grasmere and district gathered in Broadgate meadow to celebrate the signing of the Peace Treaty that finally wrote a line under the holocaust that was 1914-18. 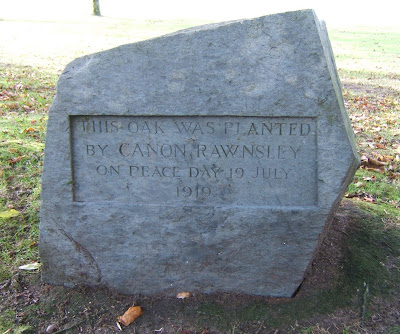 On the opposite side of the meadow, just inside the gates, is a smaller tree. 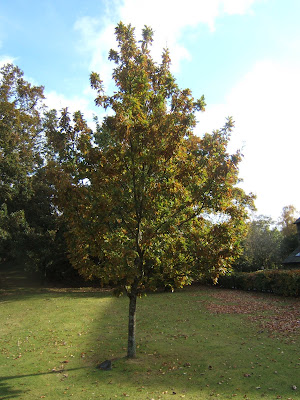 A small stone at its foot bears a brass plaque explaining that this tree was planted on August 19, 1995 to celebrate the 50th anniversary of end of World War 2. So much war.

There are other memorials in the village - for another time!
Posted by Louis at 18:48