Another publication listing names on war memorials has been kindly sent to me by the Matterdale Historical and Archaeological Society.

A labour of love, it describes the men whose names appear on the memorials at Matterdale, Greystoke, Patterdale, Penruddock and Watermillock from both world wars. 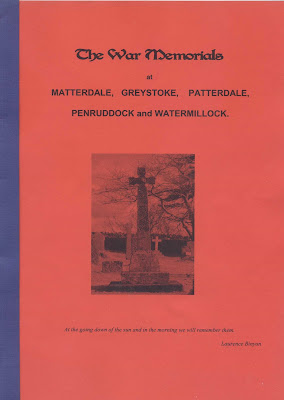 One of the great things about these locally produced publications is the anecdotal stories that often appear. The men are often remembered in their communities and stories remain in the memory of friends and family describing their lives and their fates. Such is the case here.

I found myself by the banks of Ullswater yesterday. What a beautiful place. I looked around the Salvin church at Patterdale and found two further memorials commemorating conflicts.

At the west end of the nave there is a White Ensign hanging from the wall. 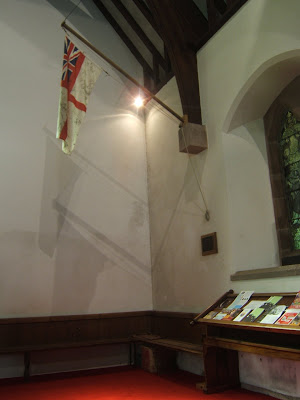 An accompanying plaque explains that it flew on a despatch boat of HMS Lion, flagship of Sir David Beatty, at the Battle of Jutland. It was presented to the church by Commander Berry RN. Best look at my earlier posting about Beatty's flag at Flookburgh!

Set against the end wall of the nave, below the flag, is a rough wooden table. 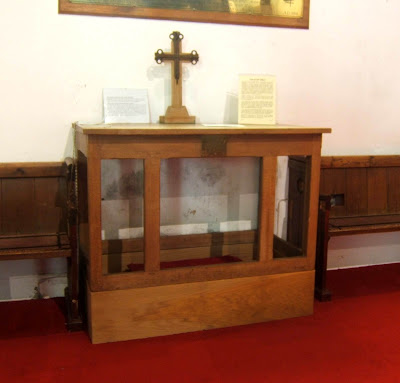 It is an altar that was originally in the crypt of St Martin in the Fields, London. It was given to the Lakeland sculptress, Josephina de Vasconcelles who installed it in the chapel of a house in the Duddon Valley that was a refuge for disadvantaged youths. In 1970 it was dedicated by the Bishop of Carlisle as a memorial to all those killed in air crashes in the Lakeland fells from the outbreak of the second world war until today; over 500 people. At the millenium Josephina gave the altar to Patterdale church as a focus of pilgrimage for friends and relatives of the dead.
Posted by Louis at 15:43

Fascinating information. I love the human detail your researches dig up.

Lovely photos too in a fair bit of detail - just discovered you get an enlargement when you click on the picture.

I enjoy the corbel support for the graceful arch for the roof.