Had a lovely day out yesterday. Started out at Holehird, the gardens of the Lakeland Horticultural Society located just off the Patterdale (Windermere to Troutbeck) road as it ascends towards Kirkstone. These spectacular gardens, which includes the national collection of Hydrangeas, are maintained entirely by volunteers. The house is a Cheshire Home. 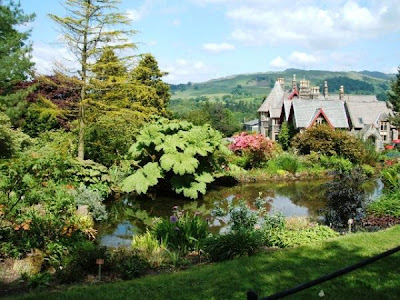 Originally they were part of the Holehird estate that was originally built up by the Lingard family in the early/mid 19th century. In 1865 it was bought by John MacMillan Dunlop, a Yorkshire industrialist. Following his death and a long family wrangle the house and grounds were sold on again to William Grimble Groves, a Manchester brewer. It has famous associations. For the two summers of 1889 & 1895 Beatrix Potter stayed here with her family when her father rented the house. In 1945 the entire estate was given to Westmorland County Council by Henry Leigh Groves JP for the benefit of the people of the county.

So what has Holehird got to do with Remembrance of war?

In an isolated poart of the estate, now in private ownership, there is a collection of small memorials to the family pets of the Groves family. Among these is a stone to 'Cobby', one of the estate's horses that was conscripted into the war effort in 1914/15.

'Cobby'
Killed at Ypres
Whilst Serving His
Country
April 1915

Thanks to Ian Jones for the pic of the memorial
Posted by Louis at 13:51