On the east side of Ullswater is the church of St Peter of 1882 designed by John A Cory of Carlisle, sometime County Architect of Cumberland. 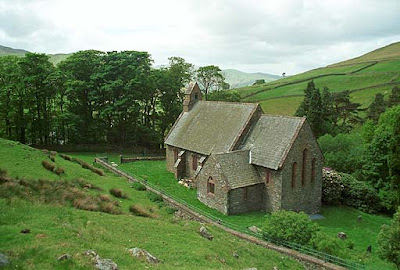 His greatest claim to fame is his work on Garlands Hospital, Carlisle, a place of some local repute.

Some way to the south of this rather bland building is the older church of St Martin of 1634. 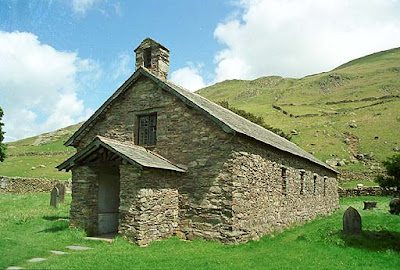 Although of no great architectural merit St Peter's is a most poignant church from the point of view of memorials. In recent years it has become the focus for remembrance of HMS Glorious, an aircraft carrier sunk on June 8, 1940 during the ill fated Norwegian campaign.

The reason is a window on the south side of the church commemorating the death of Lt Commander William Hugh Parkin, aged 33, and the men of the Glorious. It is one of a series in the church designed and made by Jane Grey and inserted in 1975.

The window shows the ship viewed from above, ploughing thro' the waves. The phoenix rises from the flames, a symbol of the resurrection, and below is the ship's crest and an anchor, symbol of the Royal Navy. Below that is the bible and the symbol of the Trinity.

William Hugh Parkin (1869-1911), probably the father of Lt Commander Parkin & sometime Lt Colonel of the Westmorland & Cumberland Yeomanry, is also commemorated by a plaque in the church. Indeed another WH Parkin of Ravencragg, together with Anthony Parkin of Sharrow Bay, established St Peter's in 1882.

Since the insertion of the window a couple of people have left smaller memorials to men who were lost, a photo of the ship pre-war and this card with a sprig of lavender attached that names Royal Marine Wilfred Munslow, twin brother of Geoffrey. His photo is on the reverse. 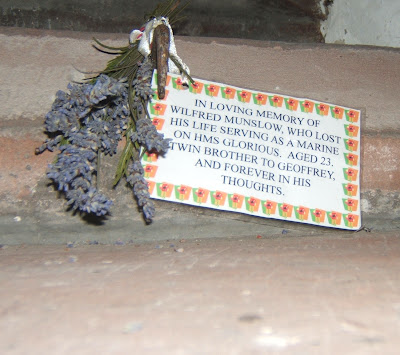 A short clip of contemporary German newsreel film shows the course of the one sided battle that led to the loss of the Glorious and her escorting destroyers, Acasta and Ardent. Out of a crew of 1564 only 45 survived three days in lifeboats. There were two survivors from each of the destroyers.
For a memorial to a man from Acasta, go here.


The window at Martindale is not the only memorial in Cumbria to honour loss on HMS Glorious. At Gosforth a wooden plaque commemorates 39 year old Lt Commander Austin Noel Rees Keene, R.N. Although retired from the Navy he rejoined on the outbreak of hostilities. He was married to Euphemia Mary Keene and lived at Torphins, Aberdeenshire. However, his parents were the Reverend Rees and Louisa Mary Keene - were they perhaps natives of Gosforth? 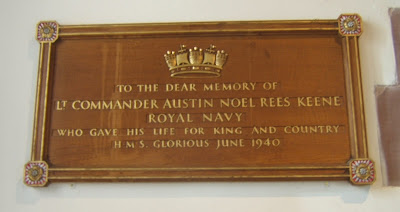 One of our guests staying at our hotel in Windermere would like to inform you that there were 2 survivors in total - one from each destroyer. Many thanks.

I was the guest at the hotel in Windermere, and just want to be clear. I was a Skua pilot flying from the Ark Royal which was in company with Glorious, and was shot down over Trondheim whilst attacking the Scharnhorst. I was picked up in Trondheim fjord by a German flying boat, and on board that plane were 2 survivors from Ardent - Able Seaman Roger Hooke & Oordinay Seaman Robert Jones. OS Jones was badly wounded and died on July 1st. I was not aware there were 2 other survivors from Acasta picked up by a Norwegian trawler. Derek Martin.

Derek, Thank you so very much for your comments - the stuff of history. What memories you must have - I salute you.
L

Firstly, I'd like to thank Derek Martin for that wonderful bit of information and even for fighting your part in the war in the first place. Thank you.

And thank you to the site owner for putting this up. I always wanted to know where the curch was after watching a BBC documentary about it and the subsequent hushed nature of the way the news was broken. I shall now make a visit to see it.

My great uncle PLY/X 1453 Marine Herbert Roberts was killed when the Glorious went down. My Grandfather, his last remaining brother and his parents never really got over the loss of Bert and even now, I get teary-eyed just thinking about it.

Any memorial to the men of the Glorious is good and always welcome in my book.