Crosthwaite in the 1920s

The memorials that I find in the villages and landscapes of Cumbria are now firmly embedded in the great continuum of English history. The raw emotional impact that they had in the days of their creation is lost, we are three or four generations on from the people who created them. Thus it is always very poignant and, I am bound to say, thrilling, when I discover something that transports the imagination back in time to a period when the memorials had an immediacy and intimacy for people and their communities.
A couple of weeks ago I was driving through the Lyth valley and found that the Memorial Hall was open with a sort of village market in progress. On a table were the last two available copies of a book, 'Cameos of Crosthwaite & Lyth', published in the valley in 2002/3. It is profusely illustrated with pictures of the communities and people of this delightful place.

On browsing thro' it I was astonished and immensely pleased to see one image which I had been hoping to find for many years. 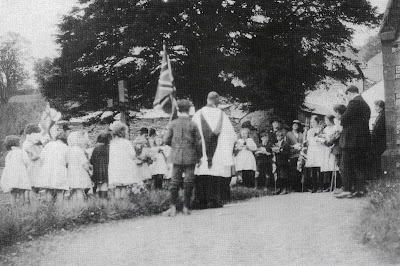 It clearly shows a memorial service being held around a wooden cross, made from village oak and erected in the churchyard in 1916, that was Crosthwaite's first memorial. Many of those seen here will have been thinking of their fathers, brothers and husbands. The dead were commemorated with brass plaques that were pinned to the cross by the bereaved as and when the men were killed or died.

This cross remained in the churchyard until 1998 when, following restoration, it was moved inside the church, first to the south transept and subsequently to its present position by the chancel arch. 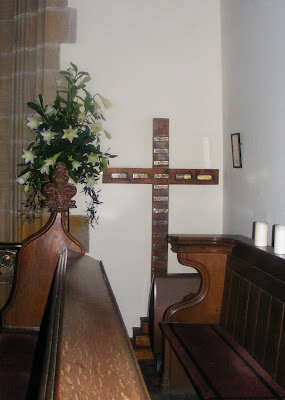 In the 1920s the village acquired a more imposing memorial in the form of a large brass plaque which, rather surprisingly, they purchased from Harrods of London. 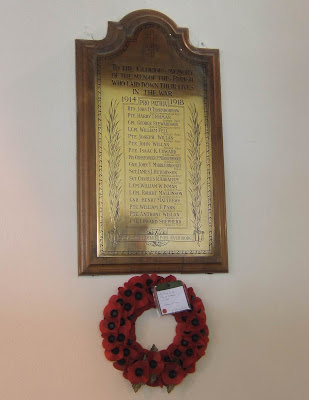 Email ThisBlogThis!Share to TwitterShare to FacebookShare to Pinterest
Labels: Crosthwaite and Lyth, WW1