I gave a talk some months ago to a group of people in Ulverston. Some time later there was a knock on my door and a lady who had been at the talk handed me a carrier bag. Inside were some old photographs and a hand written document.

The photographs were of Sergeant John Longmire of Bouth, a long time member of the 1/4th Battalion, Kings Own Royal Lancaster Regiment. 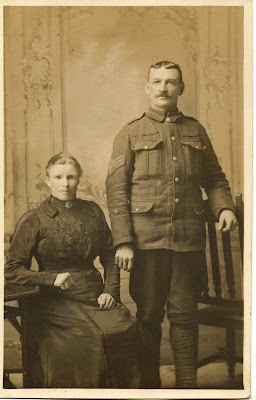 The document was a handwritten citation, bearing the Regimental crest, that was presented to John by members of Tottlebank Baptist Church and the Methodist congregation at Sparkbridge to commemorate and celebrate ten years of service to 'God and the Empire'. 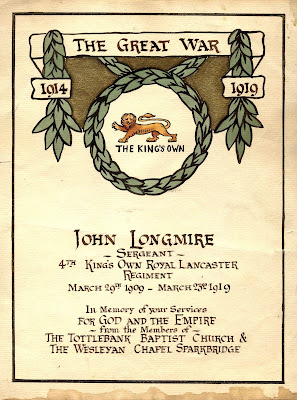 Great that they remain valued by the man's family and also very satisfying that I can bring memories of John Longmire and his service to a wider audience.
Posted by Louis at 00:14

I'm pretty sure this is the J. Longmire (Senior) commemorated on the triptych in Colton Church. The J. Longmire (Junior), also commemorated and whom I would presume to have been a son, also served, as 68499, Private, Lancashire Fusiliers, having previously served in the King's Own Royal Lancaster Regiment.

As far as I can tell John Longmire (Senior) did not serve overseas during the First World War and would have remained in the UK with the second-line TF battalions of the King's Own.

The two stars on his right sleeve intriged me. Apparently each one denotes 5 years' service with the Territorial Force, so this tallies nicely with him having served from 1909 to (at least) 1919.

Andy, I'll check this out with the lady next time she walks past with her dog. I think John was in France but I will confirm that. I also have some pics of the 1/4 KORL band that she gave me. Delightful!

Its wonderful that you have this photo...My grandma is a Longmire and from Kendal..Do you have anymore photos of any Longmires in your bag...or can anyone else help me...melcoline@yahoo.com