An intriguing question posed by War Memorials is why a memorial is as it is? In particular why a specific designer or architect?
When I first started looking at these things I spent a whole summer driving round The Lakes trying to look in every church and in every community. Many memorials were pretty unimpressive but I was also amazed at the originality and craftsmanship that had been employed in the creation of some of these things. One that blew me away when I first came across it was the memorial cross at the church of St Margaret of Antioch, Low Wray, on the west side of Windermere. 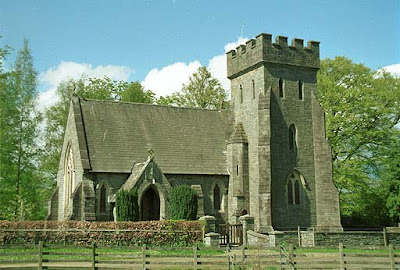 The church was built in 1856 by James Dawson, a retired surgeon from Liverpool, who built Wray Castle next door and intended the Church as a chapel for the spiritual benefit of his family, retainers, estate workers, servants and friends. After Dr Dawson's death in 1875, the estate was inherited by his nephew Preston Rawnsley who in 1877 appointed his cousin, Hardwicke Rawnsley, as vicar. 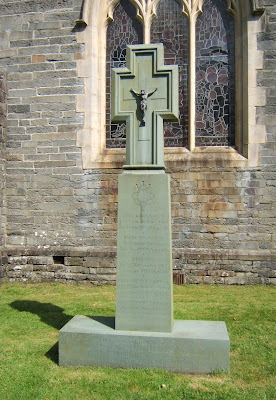 The cross was designed by the architect Philip Robson and sculpted by Jackson's monumental masons of Ambleside in beautiful local green slate. So why was Robson chosen as the architect? Quite honestly I don't know but there are some pointers.

Philip Appleby Robson (1871-1951) was initially articled to his father E R Robson, the first architect appointed by the London School Board in 1870, before joining J L Pearson’s office in c1890. He was in private practice in Westminster by about 1898, where he remained until 1939. However, there were other offices in Tunbridge Wells and near East Grinstead, where he lived from 1905. Between 1919-22 he also had an address in Manchester as an architect and designer. He was very much an architect of the establishment.

The Manchester connection might be interesting. This church was the preferred place of worship for a number of families of considerable wealth and influence; industrialists who had great houses close by. Thus, inside the church there are four brasses for officers who died during the Great War. One commemorates Brian Crossley of the Halifax carpet family. The rest describe three brothers of the McIver family of Wanlass How, Bowness & of Bebington on the Wirral. The memorial itself was unveiled by a fourth brother, Captain Alan McIver MC, on Good Friday 1921. I rather suspect that these families, or the Rawnsleys, favoured Robson when the awarding of the commission to design the memorial was being discussed.