The women left behind - 2

I find myself fascinated by women's history, a relatively new area of study. And so I've recently found myself reading an excellent book, 'Singled Out', which describes the triumphs and tribulations of some two million single women who lived out their lives without men post 1918. They are the forgotten victims of the war. Though some found contentment in careers and academia these were overwhelmingly the middling sorts and elites. For vast numbers of working class and middle class girls there was only sadness, loneliness, deep sexual frustration and a soul crushing inability to fulfill a desperate desire for motherhood. All at a time when the opportunities for a life away from the kitchen sink and the marital bed were few and far between.

And then there were the mothers who lost sons, their only son, or all their sons .... 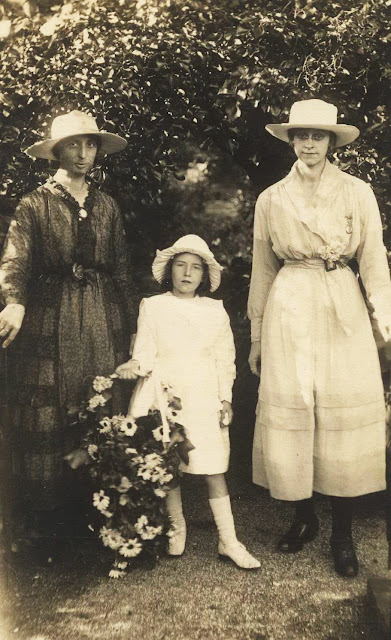 The cemeteries & churchyards of South Lakes, Cumbria, Britain & Europe are peppered with mossy and largely ignored gravetones erected  when wives and parents died but bearing the name of a deceased soldier, often put in place decades after his death. 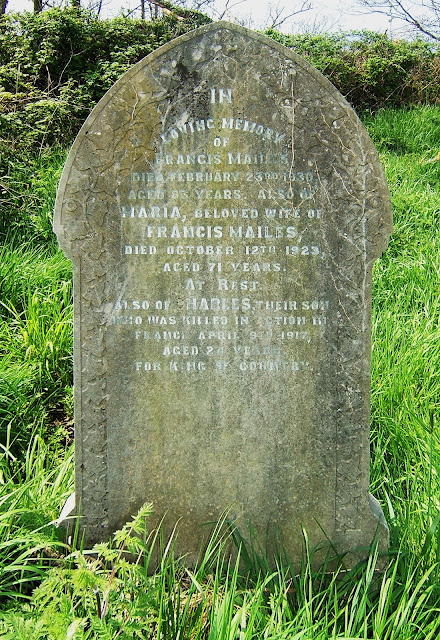 KILLED IN ACTION.- Another Askam soldier has given his life for King and country during the great battle on the western front in the person of Private Charles Jones Mailes whose parents reside at 55, Steel-street, Askam. The sad news was received on Wednesday morning from the War Office. He met his fate on the 9th ult. He was a member of the 1/4th King’s Own Royal Lancasters, and had been abroad soon after war was declared. The flag at the Council Schools was hoisted half-mast out of respect to his memory.

In Ulverston cemetery is a more poignant, simple gravestone of  Eleanor Dickinson who died in 1956, a 70 year old lady. Above her name is that of her husband, Edward,  killed in action near Spider House Farm, Oosttaverne, during the Third Battle of Ypres, July 1917. She had been left with two children. Odd that the family appears to have maintained the ascendancy of the husband in a marriage, putting his name first. 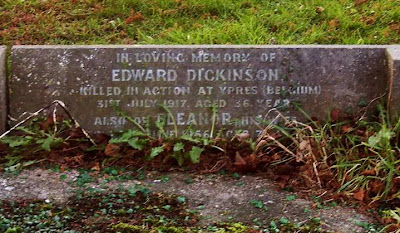 Mrs. Dickinson, 31, The Gill, Ulverston, has received official notification that her husband, Pte. Edward Dickinson, King’s Own Royal Lancasters, has been killed in action. He was 37 years of age, and the son of Mr. Matthew Dickinson, 34, Byron-street, and nephew of the late Mr. E. Dickinson, painter, etc., with whom he served his apprenticeship, and with the exception of about 12 months, when he was employed as porter in the Bank of Liverpool, at Barrow, he was in the employ of this firm all his time up to joining the army about a year ago. Pte. Dickinson was well known in the Ulverston district, and much sympathy is felt for the widow, who is left with two children, and other members of the family. 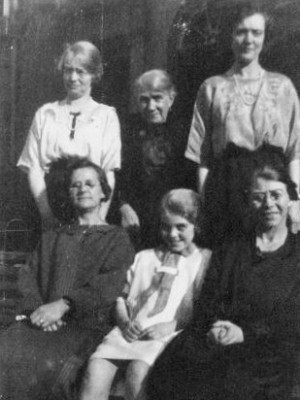 She was widowed in May 1918 when my Grandfather was killed and is sat on the right here, aged about 40, with my Mum! Front left is Beatrice Goodrich, happily married to an Engine Driver. Standing behind Gran is her cousin, Maggie Kenyon, whose fiancee was killed with the Accrington Pals - she was a stunningly beautiful young woman, looked like Angelina Jolie! Beside her is Betsy Waterworth, my Great Grandma, and standing on the left is Lena Westwell, Maggie's sister, whose husband, Fred, was also killed with the Accy Pals on the Somme in November 1916.

Maggie & Lena lived out their lives together as single women in Lime St, Accrington. I remember them as withered and exhausted old ladies, living in a time warp, a grey world of sadness and dusty old lady smells.

After nearly dying from overwork during the 20s and 30s Gran moved in with my parents when they got married in 1936 and lived with us till 1976 when she died, in her own bed, aged 90. A widow for 58 years. She never had another man and among her last words before she passed away was 'Dear Arthur', my grandfather.

Dear Louis,
I am hoping to contact you regarding the possible use of your family photo for publicising a show I have devised with my musical colleagues entitled 'Women of World War One' and which is booked for several arts centres, churches and schools. Would you kindly email me at jacquelynbevan@yahoo.co.uk?
Many thanks,
Jackie Bevan